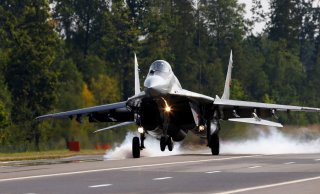 Russia’s inability to achieve air supremacy in the skies above Ukraine remains difficult to explain. Certainly, given that the Russian Air Force operates more than 700 fighter jets to Ukraine’s roughly sixty-four fighters, it should have been relatively easy for Moscow to dominate Ukraine’s skies. Yet why has this not occurred?

In recent months, senior U.S. defense officials at the Pentagon have pointed to Ukrainian fighters’ sheer intensity and morale, the impact of “risk-adverse” Russian military leaders, and the effectiveness of Ukrainian air defenses as explanations. All of these factors, however, do not fully account for why Russia is still unable to achieve air supremacy six months into the war, despite having hundreds more fighter jets than Ukraine.

But this circumstance may now be inspiring Ukraine and the West to think that achieving “air superiority” over the Russian Air Forces is not out of the question. Indeed, Undersecretary of Defense for Policy Colin Kahl has repeatedly said sending Western fighter jets to Ukraine is not “inconceivable,” something which officials say is still under consideration. The prospect of sending Western fourth-generation fighter aircraft seems very much alive, yet Pentagon officials describe this as a longer-term effort.

“…[O]ur current priority as it relates to aircraft is making sure that Ukrainians can use the aircraft they currently have to generate effects in the current conflict,” Kahl told reporters according to a Pentagon transcript.

In the near term, Ukraine’s Soviet-era, Russian-built MiG-29 fighters are being armed with cutting-edge Western weaponry such as the High-Speed Anti-Radiation (HARM) missile specifically configured to fire from Russian jets.

An increased ability to track and destroy Russian air defenses suggests that Ukraine and its Western allies are not “ruling out” the prospect of achieving air superiority over Russia, despite their overwhelming numerical deficit. One key element of this is the ongoing effectiveness of Ukrainian air defenses, some of which are U.S.-provided National Advanced Surface to Air Missile Systems (NASAMS).

“[A]s it relates to future aircrafts, fourth generation aircraft, for example, even if we were to provide those now, they wouldn’t arrive for years, so we’ve been focused on as it relates to their fighter aircraft on what they need for the [sic] to support the current efforts to hold in the east and perhaps going on a counter offensive,” he said.