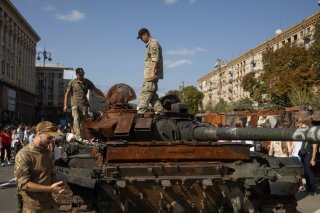 Reuters reported on Monday that Ukrainian authorities have forbidden large gatherings and public events until Thursday due to the risk of Russian rocket attacks, according to a document published by the city’s military administration. Ukraine’s second-largest city of Kharkiv, which has been relentlessly shelled by Russian forces in recent months, has followed suit in banning all Independence Day-related festivities. Similar guidelines were issued by the port city of Mykolaiv in southern Ukraine.

Ukrainian president Volodymyr Zelenskyy warned over the weekend that Russian forces could do something “particularly cruel” to upend the August 24 celebrations. “Russia could try to do something particularly disgusting, particularly cruel,” he said. “One of the key tasks of the enemy is to humiliate us, Ukrainians, to devalue our capabilities, our heroes, to spread despair, fear, to spread conflicts…Therefore, it is important never, for a single moment, to give in to this enemy pressure, not to wind oneself up, not to show weakness,” Zelenskyy added, according to CNN.

Independence Day is a public holiday commemorating Ukraine’s 1991 Declaration of Independence from the Soviet Union. Kyiv marked the occasion last week by displaying lengthy columns of captured and destroyed Russian military equipment on the city’s streets. “In February, russians were planning a parade in downtown Kyiv. 6 months into the large-scale war the shameful display of rusty russian metal is a reminder to all dictators how their plans may be ruined by a free and courageous nation,” Ukraine’s Ministry of Defense tweeted.

Kyiv is located far from the eastern and southeastern parts of the country where the fighting is currently concentrated and has rarely come under attack since Russia closed the war’s northern theater in March. Russian officials, who have been vocal over the course of the war in commenting on battlefield developments, have not shown any public interest in the Ukrainian celebrations nor is there concrete evidence of imminent Russian intent to disrupt the festivities. Observers have speculated that Moscow could order new strikes against major Ukrainian population centers as retaliation for the killing of Daria Dugina, daughter of Russian ultra-nationalist philosopher Aleksandr Dugin. Moscow accused “Ukrainian special services” on Monday of perpetrating the attack, a claim that Kyiv officials have denied.