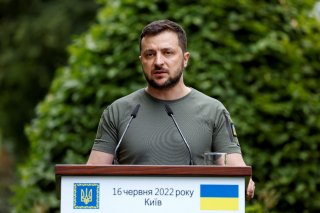 The Eighth Administrative Court of Appeals in Lviv, Ukraine announced on Monday that it had banned the Opposition Platform—For Life (OPFL) party, traditionally Ukraine’s largest pro-Russian political party, from operating within the country’s territory.

The decision, announced on the appeals court’s Facebook page, indicated that all of the party’s assets and property within Ukraine would immediately be forfeited and given to the state. The court’s ruling comes following a decision by the Verkhovna Rada, Ukraine’s parliament, that all pro-Russian parties within Ukraine would be banned following the Russian invasion on February 24.

"The court satisfied the claims of the Ministry of Justice of Ukraine,” the court’s statement read. “The activities of the political party ‘Opposition Platform—For Life’ were banned; the funds and other assets of the party … were transferred to the ownership of the state.”

Following the party’s dissolution, it is possible that the roughly 4,000 local officials who had been elected as members of the party will also be forced to forfeit their posts. The Cabinet of Ministers of Ukraine, which leads the country’s executive branch, reportedly proposed to the Verkhovna Rada that the ban on the OPFL be used as “the basis for depriving the mandate of members of local councils,” according to the state-run Ukrainian News Agency.

Prior to the court’s decision, the OPFL’s twenty-three national representatives within the Verkhovna Rada voluntarily left the party after its initial ban. The defecting legislators formed a second political party, the Platform for Life and Peace, which remains committed to the interests of the Russian minority within Ukraine but has publicly condemned Russia’s invasion and distanced itself from the OPFL’s openly pro-Russian members, including former leader Viktor Medvedchuk.

In addition to the OPFL’s ban, the Eighth Administrative Court also banned nine other pro-Russian political parties, including the Party of Shariy and the Opposition Bloc.

During its existence, the OPFL claimed to represent the interests of ethno-linguistic Russians within Ukraine and opposed Ukraine’s integration with the European Union in favor of closer ties with Russia. The party drew most of its support from the predominantly-Russian areas of eastern Ukraine, which have historically supported ethnic Russian and pro-Russian candidates. In 2019, Volodymyr Zelensky, a native Russian speaker who supported integration between Ukraine’s Ukrainian and Russian populations, received overwhelming support in eastern Ukraine while incumbent President Petro Poroshenko received comparatively more votes in the west.