Ukraine Is Building Anti-Ship Missiles (In Part Thanks to Russia) 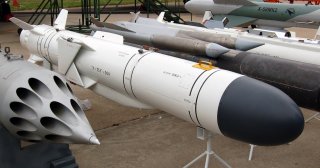 Kiev has been quietly developing their own arms manufacturing industry since 2013.

The goal was two-fold: to supplement aid from Washington with domestically-produced equipment, and to become a player in the export markets. How have they fared five years down the line? One of their most ambitious undertakings, homemade anti-ship cruise missiles, provides a clear window into Ukraine’s progress and ongoing challenges.

The “Neptune” project, announced in 2013 by Ukrainian manufacturer Luch Design Bureau, was meant to provide Ukraine with a deterrent against Russian sea power in the Azov region. Neptune uses a150-kilogram high-explosive fragmentation (HE-FRAG) warhead and can be deployed on air, sea, and land platforms, though initial deployments are slated for Ukraine’s Azov Sea coastal missile defenses. The missile boasts a maximum effective range of just under 300 kilometers and is designed to destroy vessels with a displacement of up to 5,000 tons; frigates, generally.

If these specifications sound familiar, it’s because Neptune is a lightly modernized variant of the Russian-made Kh-35 anti-ship cruise missile. Introduced in 2003, the Kh-35 is distinguished by its shorter body and range while retaining the core design principles of its Neptune counterpart. Neptune also adds a new inertial guidance system with active radar seeking.

Ukraine was extensively involved in the production of the Kh-35, especially its R95-300 engine; it is therefore unsurprising that they would tap into their existing base of expertise to pursue a Kh-35 derivative rather than sinking R&D expenditures into an entirely new design. This does not mean, however, that the Neptune project has not been without its setbacks.

First, Ukraine must contend with an increasing, but still modest defense budget of $3.1 billion as of 2018. This problem has been partly offset with a large stream of US foreign aid-- and more recently, direct lethal aid-- but Kiev’s resources remain thinly stretched across a wide range of expensive projects. To the extent that external aid has fueled Ukrainian military modernization, prospective aid decreases in the future could just as easily force Kiev to shelf some of these key modernization projects.

Secondly, Ukraine is still coping with the rift in its supply and production chains left by its diplomatic break with Russia. Whereas the Kh-35 and its predecessors were created with the USSR’s massive economies of scale, Ukraine must now invest in new, potentially less efficient production processes while repurposing Soviet-era components whenever it can. The latter is particularly salient for Neptune, given that it runs on a close derivative of the Soviet-era TRDD-50 engine.

Nonetheless, Ukraine has forged ahead with Neptune. Last year, Kiev announced that they had conducted Neptune’s first successful flight: “During the successful tests, the missile’s flight efficiency and systems operations were checked,” according to National Security and Defense Council Secretary Oleksandr Turchynov. “Today’s tests have opened a new stage of the missile program, according to which our Armed Forces must receive powerful high-performance cruise missiles that can accurately strike hostile targets at great distances,” Turchynov added.

On the heels of this highly-publicized test, defense expert Serhiy Zgurets told Ukrainian news that Neptune will be deployed within the next three years. This would put Neptune at a ten-year development cycle, roughly the same interval as the creation of the original Kh-35 in 2003 and the introduction of its Russian “Uranus” successor in 2015.

If successful, Neptune would be a key technical and symbolic milestone in Ukraine’s missile development program. At the same time, the Neptune project is an apt illustration of the complex challenges and uncertainties awaiting Kiev on the path to military modernization.

Land-Based Anti-Ship Missiles: A New Weapon for America and its Allies in Asia?