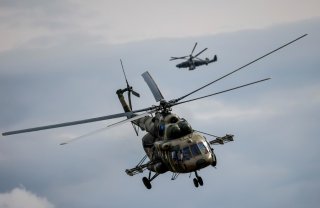 Multiple news reports are now showing video of a Russian helicopter being hit and destroyed before crashing to the ground in Ukraine, a sign that Ukrainian air defenses are having their intended effect.

The missile may have been an upgraded variant of the Stinger anti-aircraft missile, which was made famous for its role in attacking Soviet helicopters in Afghanistan during the 1980s. Thousands of anti-armor weapons are pouring into Ukraine from more than fourteen countries, according to the Pentagon, yet even more intense and highly lethal combat may be coming in the near future.

“Putin still has the vast majority of his aircraft … that he had amassed over the last few months, he has the vast majority of them still available for use, even though we know that some of the aircraft have been shot down by the Ukrainians and we assessed that he's also had some sustainment issues of his own in terms of his ability to maintain his aircraft,” a senior defense official told reporters on March 7. This suggests that a much heavier, concentrated, and lethal Russian air attack may be coming, given that only a fraction of the country’s air power has been deployed to Ukraine.

Global Firepower reports that Russia operates over 700 fighter jets and over 500 attack helicopters. However, if Russia has so much airpower, why wouldn’t it use it in Ukraine? Is the airspace above Ukraine still contested due to a lack of effort on the part of Russia? It would seem unlikely that Russia would choose to operate without air superiority if it could achieve it.

The Pentagon has said that Ukrainian air defenses have been effective and Ukrainian forces are successfully using the weapons provided to them by the West. Furthermore, pure numbers in terms of aircraft do not necessarily translate into performance superiority, as the effectiveness of the technology and state of repair are of great consequence as well. For example, Gen. Ben Hodges, former commander of U.S. Army Europe, said that he would be surprised if more than 50 percent of Russia’s helicopters were properly maintained and capable of operations.