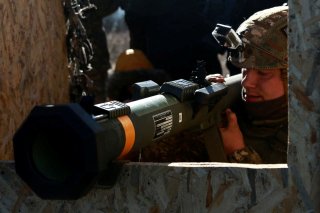 The people of Ukraine are continuing to fight for their nation's existence. Ukrainians have been aided in their struggle as the United States and its allies have flooded the nation with weapons to counter the Russian military.

"In less than a week, the United States and NATO have pushed more than 17,000 antitank weapons, including Javelin missiles, over the borders of Poland and Romania, unloading them from giant military cargo planes so they can make the trip by land to Kyiv, the Ukrainian capital, and other major cities," The New York Times reported on Sunday.

Just last week, the U.S. Chairman of the Joint Chiefs of Staff Gen. Mark Milley made a trip to an undisclosed airfield near the Ukrainian border that has become a hub for shipping weapons, a senior Defense Department official told CNN. Milley was able to see firsthand the multinational effort to get weapons into Ukraine amid Russia's unprovoked invasion.

The unnamed defense official said the “vast majority” of a $350 million security assistance package from the United States has already been delivered to Ukraine just one week after it was officially approved by the White House.

In addition to the American-made Javelins, Anglo-Swedish short-range NLAW (Next Generation Light Anti-tank Weapon); and rocket-propelled grenades, other anti-tank systems have also made it to the Ukrainians. Videos have been shared on social media that show Ukrainians using the weapons against invading Russian armored units.

The weapons have been used to slow and stall Russian assaults, and so far the result has been a significant number of destroyed Russian tanks. The Ukrainian military claims to have destroyed more than two hundred Russian tanks and nearly a thousand armored personnel carriers (APCs) since the war's start, though independent analysts have verified fewer of those successes.

Both Russians and Ukrainians are using propaganda to support their war efforts. However, some U.S. lawmakers aren't questioning the number of vehicles reportedly destroyed by Ukrainians, but rather the number of weapons that have actually made it to Ukraine.

The United States Department of Defense (DoD) has not confirmed that 17,000 anti-tank weapons have actually made it to the besieged nation.

"On the (17,000) figure: That is much higher than we’ve been briefed,” said Rep. Mike Waltz (R-Fla.), a retired U.S. Army colonel and Special Forces officer who now serves on the House Armed Services Committee, according to Task & Purpose. “Is that 17,000 pledged or 17,000 in their hands? And what’s the breakdown because it’s certainly not that many Javelins or even NLAWs [Next generation Light Anti-tank Weapons]. I'm curious what they're classifying as an anti-tank weapon."

Waltz also warned that Russia could retaliate against the United States by attacking the supply convoys, but added that the "Defense Department is working on diversifying the locations from which things are being sent in."

Ukrainian leaders have told U.S. officials that the weapons shipments were "making a difference on the battlefield." One factor could be that the Javelin is actually a rather simple weapon to operate. Task & Purpose described the weapon's targeting pod as feeling a lot like a video game, which could make it easier for young troops to be trained on.

However, this is no game.

Ukrainians are risking their lives, and while many of the weapons are "fire and forget" – meaning that the operator only needs to be briefly exposed – taking on a tank is never going to be easy. Yet, for now, Ukraine seems to have the men and women ready and even eager to fight the Russians. At this point there could now be a far greater number of anti-tank weapons in Ukraine than all the tanks Russia has in its arsenal.