From Ukraine With Love: Russian Oil Refinery Goes Up in Smoke 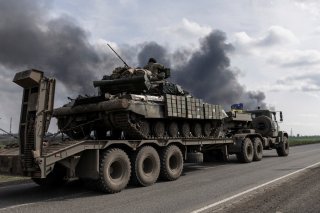 An oil depot in Bryansk, a Russian city located roughly ninety miles from the Ukrainian border being used as a transit hub for the country’s military, caught fire on Monday morning, according to Russia’s state-run RIA Novosti news network.

The blaze began at a facility owned by the Russian petrochemical company Transneft-Druzhba JSC, according to the outlet. Russia’s Interfax news agency separately reported that a 10,000-ton tank of diesel fuel had caught fire.

A simultaneous fire in the same city—in Bryansk’s Fokinsky district, according to Moscow’s Kommersant newspaper—suggests that Ukrainian forces were involved in the fires, and local Russian spokesmen have blamed Ukrainian helicopters for the fires, although the government in Kyiv has not claimed responsibility for the incident. Roman Starovoit, the Russian governor of the Kursk region, indicated on Sunday night that Russian forces had shot down two Ukrainian drones over their territory, which, if true, would suggest the involvement of Ukraine’s air force.

Ukraine has repeatedly targeted Russian oil facilities since the onset of the country’s invasion on February 24. Consequently, Russian forces have experienced difficulties supplying their heavy weapons systems—which typically require a great deal of fuel to operate—with gasoline, restricting their movement and limiting their effectiveness.

Prior to the fires on Monday morning, police and government officials within Bryansk had warned that the city, an administrative center near Ukraine to its northeast, could be threatened by “terrorist” activity. Similar precautions were taken in Belgorod, another Russian city located near the Ukrainian border, which saw a similar attack on its gas supplies in mid-March.

Residential buildings in the city were not threatened, and the country’s Ministry of Emergency Situations noted that no evacuation of the city population was planned, according to the report.

Although there were no casualties from the incident, footage circulated widely on social media depicting the enormous fires at the refinery, and clouds of black smoke over the city were visible from miles away.

The fire in Bryansk is the second major fire in Russia in recent days. On April 21, a fire at a military research facility in the city of Tver led to at least six civilian deaths. The Russian government has announced an investigation into the cause of that blaze, which has initially been ascribed to faulty or aging wiring.

Within hours of the Tver blaze, a second fire broke out in the Russian city of Kineshma, located to the east of Moscow, affecting a chemical factory.