Ukraine Must Think Outside the Box to Counter Russian Ground Forces 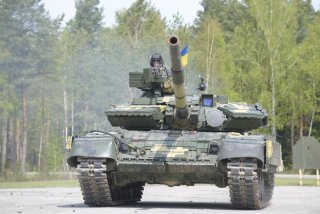 As Russian missiles strike key military targets throughout Ukraine and armored ground vehicles advance toward Kyiv, it is important to consider how Ukrainian ground forces may counterattack.

Not surprisingly, Ukraine’s military operates largely Soviet-era equipment and weapons. While the extent to which these Soviet-era tanks, armored personnel carriers, and weapons have been upgraded in recent years is not fully known, size may actually be the key difference between Ukraine and Russia’s ground forces. Global Firepower’s 2021 reports state that Russia operates as many as 12,000 tanks, whereas Ukraine has less than 3,000.

The Ukrainian tank force is largely comprised of Cold-War era T-72s, T-80s, and T-84s.  Kyiv’s newest tank, the T-84, is an upgraded Ukrainian variant of the Soviet-era T-80 tank. The fact that the Ukrainian T-84 dates all the way back to 1999 is not particularly concerning, as its weapons, thermal sights, and computing systems may have been substantially upgraded. The U.S. Army’s Abrams tank, for example, has had its life extended through years of upgrades that have made it almost an entirely new vehicle.

Regardless of the relative sophistication of the tanks themselves, the real question about any tank-on-tank equation is simply one of numbers. Massive formations of Russian tanks will likely be able to overwhelm and destroy many Ukrainian tanks.

Outside of tanks, Ukraine might seek to slow down or damage incoming Russian armored vehicles with self-propelled and towed artillery platforms. However, Ukraine’s artillery is quite old and somewhat limited in range. As a result, more modern and mobile Russian artillery might be positioned to destroy Ukrainian formations from protected positions. While not many specifics are known, Russia’s new self-propelled 2S35 Koalitsiya-SV artillery platform is reported to have a high rate of fire and an extremely long range. As this Russian system is much more advanced than Ukraine’s rival systems, it could have a decisive impact on the battlefield. In addition, Russia has over 5,000 more pieces of towed artillery than Ukraine.

With all this in mind, it seems that a major Russian ground advance would be positioned to massively outgun any Ukrainian defense. However, as Ukraine is likely to employ hit-and-run operations and attempt to control key chokepoints, Kyiv may be prepared to make up for its smaller arsenal of tanks and artillery.