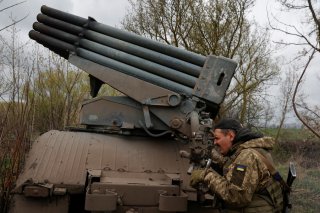 Over the past eight weeks, Ukrainians have shown incredible resilience against the Russian invasion. According to the Ukrainian Ministry of Defense, over 21,000 Russian soldiers have died since the start of the invasion (Western officials estimate the figure is closer to 15,000). Thousands of Ukrainian civilians have died, and the United States believes that 2,000 to 4,000 Ukrainian soldiers and volunteers have perished in the war. This is in addition to the 14,000 ethnic Ukrainians and Russians who perished after the first Russian invasion of Ukraine in 2014. Simply put, the war has been catastrophic.

But how long can the Ukrainians hold out?

While the international community continues to aid Ukraine, the Ukrainians desperately need military assistance. The Ukrainian army and its volunteer battalions need bulletproof vests, helmets, boots, and ammunition. The country has also called for medical assistance so that hospitals can tend to injured combatants and civilians. Finally, Ukraine is in urgent need of funding; the economic consequences of the war in Ukraine have already surpassed $100 billion. A food crisis is also possible.

Given the devastation caused by the war, Ukraine’s borders must remain open. Numerous forms of humanitarian, medical, and military aid have arrived in Ukraine by way of Poland. Lviv, a city in western Ukraine, has become a major hub for this effort.

If the international community continues to provide aid to Ukraine, then the Ukrainians can win the war. According to reports, Russia executed its invasion incredibly poorly, with casualties now mounting and much of its equipment destroyed. The losses are leading to a major decline in Russian morale.

Meanwhile, half a million Ukrainians have returned to Ukraine to protect their homeland, and countless foreign fighters have traveled to Ukraine to help defend the country. Overall, Ukrainian morale is high. The Ukrainian military’s persistence could force the Russians from the country, reminiscent of the Finns defeating the Soviets in the 1939-1940 war. Ukraine’s resilience, economic sanctions, and the continued loss of Russian life could be enough to stop the Russian invasion.

The Russian incursion is also behind schedule. According to reports provided by the Ukrainian Embassy in Washington, the Russian General Staff is dissatisfied with the progress of the invasion. Russian officials assumed they would capture Kyiv within four days, and the country within fifteen. Neither occurred.

Given the failed conquest in northern Ukraine and Russia’s inability to penetrate Ukrainian forces near Kyiv, the Russians have now resorted to a two-front war. In the south, Russian forces are moving through the Crimean peninsula. They established naval superiority, captured the city of Kherson, and launched an offensive in Mariupol. In the east, the Russians entered the country through the controlled territories in Luhansk and Donetsk. The Russians have attempted to capture the major cities in the east, such as Kharkiv and Kramatorsk, but Ukrainian forces have kept them at bay. As a result, the Russians have resorted to shelling these cities, leading to the deaths of thousands of civilians.

While Ukraine has stood its ground, new problems could emerge. The Russians have now recruited volunteers from Chechnya and Syria, and Russian president Vladimir Putin is also trying to coerce Belarusian president Alyaksandr Lukashenko to join the fight. Belarusian involvement could be catastrophic for Ukraine, as the distance from the Belarusian-Ukrainian border to Kyiv is only 140 miles. If the Belarusians were to invade northern Ukraine, this could turn the tide in Russia’s favor. The Ukrainians have done well in holding the Russians at bay, but fighting against two armies would be an incredible challenge.

If Belarusian forces were to enter the war, they could try to disrupt the humanitarian corridor in western Ukraine. Belarusian forces would look to position themselves near the Polish-Ukrainian border. This would stretch the Ukrainian military and its volunteer battalions by forcing them to fight on another front. A new front for Ukraine would allow the Russians to make further advances in southern and eastern Ukraine. Understanding that the corridor with Poland is essential to Ukraine’s survival, Ukrainian forces would need to combat the Belarusians so that the Ukrainians could receive humanitarian, medical, and defense aid from the international community. In other words, if the Belarusians establish a presence near the Polish-Ukrainian border, this would cut off aid to Ukraine.

Therefore, the corridor to Ukraine must remain open, and the international community should continue to arm Ukraine. If Syrian and Chechen mercenaries join the fight, and if the Belarusians cut off the international community’s supply chain to western Ukraine, Ukraine’s chances of winning the war will be significantly diminished. However, swiftly providing Ukraine with the lethal and nonlethal aid it needs will help it win the war. Time is of the essence.