Ukraine: One of the World’s Most Corrupt Countries? 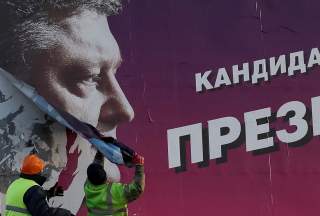 Transparency International’s most recent Corruption Perceptions Index ranks Ukraine 120th out of 182 countries, making it the second most corrupt country in Europe after Russia. Similarly, a recent Freedom House survey assesses the level of corruption in Ukraine today as only slightly better than at the height of the presidency of Viktor Yanukovych, who was toppled four years ago in the Maidan revolution.

News stories about corruption in Ukraine echo these bleak assessments, and are replete with descriptions of corruption that utilize such adjectives as“widespread,” “rampant” and “endemic.”  World leaders and international organizations repeat these claims uncritically. President Donald Trump himself has echoed the conventional wisdom, reportedly telling G-7 leaders last June that “Ukraine is one of the most corrupt countries in the world.”

These measures, however, are misleading. They focus on perceptions, episodic reporting, and surveys of public attitudes while ignoring the reality that Western-funded anti-corruption lobbying and education campaigns have greatly strengthened public pressure to pursue anticorruption reforms. Paradoxically, the more corruption is a focus of public discourse, the larger the problem seems—even as tangible, verifiable progress is being made.

Ukraine’s Institute of Economic Research and Policy Consulting (IER) has attempted to separate the wheat from the chaff by quantifying the effects of reforms that have been undertaken by the Ukrainian government since 2014. The report, produced by a team of Ukrainian economists and refereed by a panel of their distinguished Western peers, examines the economic consequences of key reforms to arrive at a quantifiable figure of the reduction of corruption in dollar terms.

The findings are startling. According to the study, reforms now in place in Ukraine have reduced national corruption by a staggering $6 billion per year—a figure equivalent to nearly six percent of the country’s official GDP. These reforms, and the increased effectiveness of state tax and revenue authorities have also helped to significantly reduce the size of the country’s once-formidable shadow economy.

Gas market reforms have drastically reduced the gap between imported gas and artificially lower domestic prices. The discrepancy, and the wheeling-and-dealing that surrounded it, previously allowed corrupt officials to make billions of dollars in illicit profits at the expense of the state. The price gap also created domestic dependence on Russian gas (which Ukraine no longer imports) and led to huge losses for Naftogaz, the state’s oil and gas monopoly. Today, by contrast, a reformed Naftogaz is a major contributor to state coffers, generating well over $1 billion in profits annually. Cumulatively, the savings from gas sector reforms amount to approximately $ 3 billion per year.

Tax reforms have eliminated huge “tax holes” amounting to at least $1 billion per year. Such reforms include electronic filing for VAT, which has curbed graft. Additionally, under the Yanukovych regime, the entire revenue system was controlled by the president’s cronies through an elaborate network of money laundering and cash payments to tax inspectors, who—for a fee of typically six to twelve percent—would construct false documentation of incomes and expenses.

Greater government accountability has also made a material difference. An electronic system of public procurements called ProZorro has drastically reduced corruption in bidding for government contracts since its launch in 2014—resulting in $1.1 billion annually in reduced costs to the state.

To be sure, major problems remain. Ukrainians are rightly unhappy with the slow pace of justice, including delays in the prosecution of members of the former regime and corrupt officials at all levels. And much work remains to be done—including the need to privatize remaining inefficient state companies and reform of the country’s corrupt customs service.

Even so, an impressive amount of measurable progress has been achieved. As elections for Ukraine’s president and parliament approach, and populist opposition candidates attack those in power with a wanton disregard for the facts, it is important for Western journalists and leaders to accurately assess Ukraine’s reforms and properly assess its overall progress. As it stands, an unbalanced view of Ukraine’s progress is driving disaffected voters to opt for demagogic and simplistic solutions.

At this pivotal moment, the international community and Ukrainian voters must better understand the real gains that have been made. Ukraine is reforming, and it is doing so both because of Western goading and civic pressure, but also because of the actions of its often unfairly-maligned government leaders.