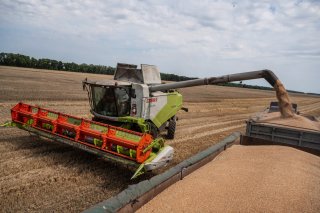 Ukrainian foreign minister Dmytro Kuleba vowed on Tuesday that the Ukrainian government would dispatch additional shipments of grain to underdeveloped regions in Africa—a move likely calculated to influence public opinion on the continent in favor of Ukraine amid its war with Russia, as well as to address a growing humanitarian issue.

The foreign minister’s announcement came during a visit to Dakar, Senegal, on the first leg of his tour of Africa this week. During his visit to Dakar, Kuleba met with Senegalese president Macky Sall, who also currently serves as the chairman of the African Union (AU) and has vocally supported efforts to continue the export of Ukrainian grain despite the ongoing invasion.

“We will do our best until the last breath to continue exporting Ukrainian grain to Africa and the world for food security,” Kuleba said at a joint press conference with his Senegalese counterpart, Foreign Minister Aissata Tall Sall.

Africa has been negatively affected by the Russian invasion of Ukraine, which sharply disrupted regularly-scheduled exports of Ukrainian grain to the continent. Before the invasion, Africa had been heavily dependent on Ukrainian grain imports, and global food prices skyrocketed after the invasion, restricting the imports of countries that had not traditionally imported from Kyiv. The United Nations, the African Union, and other international organizations have each warned about the possibility of famines being caused by the shortages, and USAID has launched several aid programs to target the most vulnerable areas on the continent—particularly in Ethiopia, where an ongoing civil war has exacerbated the crisis.

Although Ukrainian grain exports resumed from Odesa, the country’s largest port, and two other cities along its Black Sea coast following a Turkish-mediated agreement, Ukraine’s Agriculture Ministry reported in September that grain exports had fallen by forty-three percent compared to the previous year—largely as a result of the economic devastation and lack of available labor from the ongoing war.

Many African nations—including Senegal—have largely remained neutral on the Russo-Ukrainian War, seeking to avoid alignment within the growing conflict between Russia and the West. Kuleba’s trip to Africa comes months after a similar visit by Russian foreign minister Sergey Lavrov, who blamed the continent’s burgeoning food crisis on the West for its alleged refusal to allow the export of Russian grain—a statement that Kuleba denounced as “Russian propaganda.”

However, the Ukrainian foreign minister emphasized that he “[did] not come to Africa against anyone,” but as part of a goodwill mission intended to strengthen Kyiv’s ties with the continent.

“We must strengthen our cooperation,” he said. “Our future depends on the relationships we build and what happens every day.”