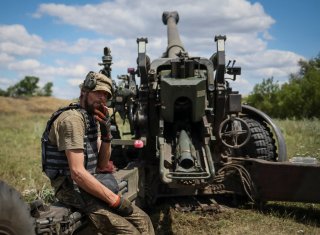 Ukrainian forces are preparing for a large-scale counteroffensive to retake a key southern region lost in the opening stages of the war, according to top officials.

“We want to liberate our territory and return it all to our control,” Senior Lt. Sergei Savchenko told the New York Times. “We’re ready. We have wanted to do this for a long time.” Leveraging their new U.S.-provided High Mobility Artillery Rocket Systems (HIMARS), Ukrainian forces have intensified their strikes against Russian military assets in the occupied Kherson region.

Ukraine’s deputy prime minister, Iryna Vereschuk, said earlier this month that Ukrainian forces are preparing for a counteroffensive in the Kherson region, urging locals to flee. “You must look for a way to leave because our armed forces will de-occupy. There will be a huge battle. I don’t want to scare anyone, everyone understands everything anyway,” she said. Western and Ukrainian officials have assessed that conditions are ripe for a major Ukrainian counterattack, citing the alleged exhaustion of Russian forces and growing deficits in inventories of key military equipment.

Pro-government Kherson official Serhiy Khlan told Ukrainian television that Ukrainian forces are making steady progress in the Kherson region, adding that the territory will "definitely be liberated by September.”

There have been reports of isolated skirmishes in recent days, but there is currently no indication of a concerted large-scale Ukrainian offensive in or near the Kherson region. Ukrainian military officials said they are conducting a series of smaller strikes and ground operations in preparation for a larger assault. “You could compare it to waves,” an official told the New York Times. “Right now we’re making small waves and creating conditions to make bigger ones.” Military experts have previously questioned whether Ukraine has the manpower and resources required to mount a successful offensive to retake Kherson, a major regional capital that is continually being reinforced by Russian troops.

Pro-Russian occupation officials in Kherson announced last month that the city is moving forward with plans for a referendum to formally join the Russian Federation, part of what the White House has described as a broader plan by the Kremlin to annex large swathes of eastern and southern Ukraine.