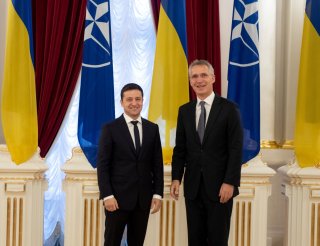 As Russian forces massed on the Ukrainian borders in the weeks leading up to Russia's unprovoked invasion, one of Russian president Vladimir Putin's main demands was that Ukraine would never join NATO. Putin had also called for NATO to withdraw from Eastern Europe and return to its pre-1997 status—before several nations including the Baltic States of Estonia, Latvia and Lithuania joined the international alliance—and all of those demands were dubbed "non-starters" by the Biden administration and NATO officials.

On Monday, Ukrainian president Volodymyr Zelensky has said he is no longer pressing for NATO membership for his country, while he also said he is open to "compromise" on the status of Luhansk and Donetsk in the Donbas region, the two breakaway pro-Russian territories that Russia recognized as independent just prior to its invasion on Feb. 24.

"I have cooled down regarding this question a long time ago after we understood that ... NATO is not prepared to accept Ukraine," Zelensky said in an interview that aired Monday night on ABC News. "The alliance is afraid of controversial things, and confrontation with Russia."

The Ukrainian leader added that he isn't willing to "beg on my knees" to join NATO, but also said that while he is open to dialogue on the future of Crimea—which Putin has said should be recognized as Russian territory—and the other regions, he isn't willing to accept any Russian "ultimatums." Crimea has been controlled by Russia since it was annexed by Moscow in 2014, while Donetsk and Luhansk have been under the rule of pro-Russian rebels since 2014 as well.

"Regarding temporary occupied territories and unrecognized republics... we can discuss and find a compromise about how these territories will live on," Zelensky said during his TV interview. "What is important to me is about how the people in those territories who still want to be part of Ukraine will live."

The Issue of NATO

Moscow has been very public about the fact that it does not want neighboring Ukraine to join NATO, the transatlantic alliance created at the start of the Cold War to protect Europe from the Soviet Union. Despite its original mission, to confront Soviet aggression, the alliance actually expanded after the dissolution of the Soviet Union in 1991 and now includes multiple former Communist Bloc and Warsaw Pact members, as well as the aforementioned Baltic states, which were once part of the former Soviet Union.

Putin has seen NATO enlargement as a threat and has said he would take the steps to stop further expansion. Yet, Russia's invasion of Ukraine could serve as a tipping point to push historically neutral nations, including Sweden and Finland, towards joining NATO. Even if Ukraine agrees to neutrality, Moscow may face other NATO members on its borders.