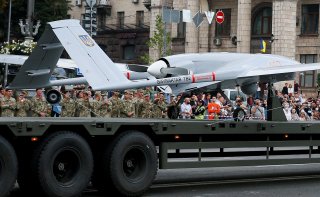 The Armed Forces of Ukraine posted a video on Twitter showing footage of a Ukrainian drone tracking and engaging Russian military vehicles in a precision strike against a convoy formation.

The drone is a Turkish design called the Bayraktar TB2. According to 19fortyfive.com, Ukraine’s Bayraktars have destroyed at least 32 vehicles. The Bayraktar is much lighter than the American MQ-9 Reaper drone, more comparable to the MQ-1 Grey Eagle.

The Bayraktar is described as a medium-altitude, long-range drone able to loiter for twenty-four hours at altitudes up to 25,000 feet. According to 19fortyfive.com, Ukraine operates about twenty of the drones and is requesting more.

Drone strikes can be a powerful tool for Ukrainian defenders. The video posted on Twitter shows an infrared image of Russian combat vehicles being targeted and attacked. While the type of munition used in the attack is not known, the Bayraktar operates with a laser rangefinder and laser-targeting capability.

“The payload is 121 pounds with a 105 horse-power engine, and it only flies around 80 miles per hour,” 19fortyfive author Brent Eastwood writes. “But it comes equipped with four Smart Micro Munition laser-guided missiles.”

“It's clear to us that both sides possess drones, but the degree to which they're using them and to what effect, I'd let them speak to that,” an unnammed senior Department of Defense official said in a briefing on Thursday.