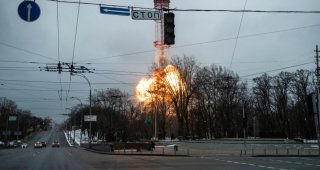 Despite the Russian military’s attempts to bomb a television tower in Kyiv and its demonstrated electronic warfare capabilities, the invading Russian forces are still unable to destroy Ukraine’s command and control apparatus. This failure raises serious questions about the effectiveness of Russia’s air attack and combined arms tactics.

While Russia has carried out multiple cruise and ballistic missile attacks against military and civilian targets in Ukraine, the country’s command and control network is fundamentally intact. “We do continue to assess that President Zelensky has command and control over his armed forces and he is exercising that command and control,” a senior U.S. defense official told reporters.

As many U.S. military officials have acknowledged Russia’s effective use of electronic weapons during its 2014 annexation of Crimea, some may be surprised that Ukrainian authorities still have command and control over their forces. Some command and control operations are dependent on internet connectivity, which could make them very vulnerable to cyber attacks. However, Russia’s supposed cyberwar expertise has not been able to shut Ukraine’s systems down.

“In the information environment, we have seen over the last 24 hours more—more impacts on open-sourced information and Internet access, but nothing of a nature that is so significant that all communications are shut down,” a senior defense official said.

In light of Ukraine’s apparent success in destroying Russian armored vehicles, the stalled Russian convoy on the outskirts of Kyiv, and Moscow’s inability to achieve air superiority, some might wonder if the Russian military has been overestimated. While Pentagon press secretary John Kirby said that he did not “want to speak too much specifically on Russian operations,” he noted that “it doesn't appear that ground and air operations seem to be very well connected.”

A well-orchestrated precision air campaign, coupled with ground fire, would seem to be capable of destroying or severely impairing Ukrainian communications systems. Why hasn’t this happened? One possibility may be that Ukrainian forces have deliberately dispersed and conducted command and control from hidden locations. Or it could be that the Ukrainians have found a way to harden their networks. Lastly, it could simply be due to Russia’s inability to successfully carry out large-scale “jamming” of command and control systems.