Ukrainian Citizens Advised to Evacute South Ahead of Counter-Offensive 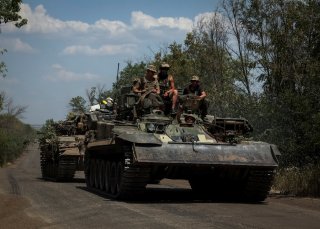 Ukraine’s Deputy Prime Minister Iryna Vereshchuk has urged civilians in the Russian-occupied southern regions of Kherson and Zaporizhzhia to evacuate as Ukrainian forces announce they are preparing for a major counter-attack.

“You must look for a way to leave because our armed forces will de-occupy. There will be a huge battle. I don’t want to scare anyone, everyone understands everything anyway,” said Vereschuk on Ukrainian television. “It’s clear there will be fighting, there will be artillery shelling... and we therefore urge (people) to evacuate urgently.” Vereschuk added that she could not say precisely when the counter-attack would happen, according to Reuters.

Ukrainian president Volodymyr Zelenskyy has previously ordered a significant counter-offensive to retake Russian-occupied southern coastal areas that are vital to Ukraine’s long-term economic health. Ukraine’s Defense Minister Oleksii Reznikov sounded a cautious tone when asked about the prospective counter-offensive. “We understand that, politically, it’s very necessary for our country. The president has given the order to the supreme military chief to draw up plans. After that the general staff are doing their homework and say to achieve this goal we need XYZ,” he told the Times. Reznikov suggested that Ukraine is building up the strength for a significant southern advance but that it cannot mount one right now. He added that he is writing letters to his foreign counterparts to discuss “why we need this kind of [heavy] weaponry and then we get the political decisions.”

Experts have questioned whether Ukraine’s armed forces have the manpower and equipment to retake Kherson, a regional capital that is taking active steps to formally join the Russian Federation. “There is no chance of this happening very soon,” analyst Oleg Zhdanov told Reuters. “Taking a city like Kherson, a major regional city, is only possible by rearming.”

Russian opposition commentators have warned that the Kremlin could turn to nuclear escalation if Ukrainian forces manage to pose a credible threat to Russian-occupied Kherson. “Putin will react to attempts to seize Kherson as an existential threat to Russia – as he considers that to be part of Russia already – and would be ready to use nuclear weapons,” said Russian opposition activist Andrei Piontkovsky, quoting Russian journalist Alexei Venediktov, according to Yahoo News.

In addition to its continued requests for significant increases in security assistance, Ukraine has previously asked the international community for $5 billion per month in economic aid—$2 billion of which it is seeking from the United States. Kyiv has recently unveiled a $750 billion, three-stage recovery plan that Ukrainian officials say could be partly financed with the confiscated assets of Russian oligarchs. “The reconstruction of Ukraine is not a local project, is not a project of one nation, but a common task of the entire democratic world — all countries, all countries who can say they are civilized,” said Zelenskyy during the Ukraine Recovery Conference in Switzerland. “Restoring Ukraine means restoring the principles of life, restoring the space of life, restoring everything that makes humans human.”