Ultimate Comeback: Russia's Typhoon Class Submarine (The Biggest on Earth) Is Back 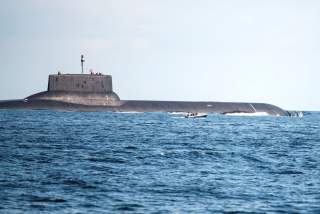 Earlier this year, Russian Vice-Admiral Oleg Burtsev told Russian state news that two Typhoon-class submarines--Arkhangelsk and Severstal--could re-enter service after a deep refit, notably including a weapons suite upgrade to over 200 Kalibr cruise missiles: “the dimensions of each of these submarines allows them to be armed with at least 200 [Kalibr] cruise missiles each.” Burtsev’s proposal drew its share of skepticism, centered around cost and practicality concerns.

It now appears that Russia’s Northern Fleet plans to give at least one of its Typhoon submarines a new lease on life, though not quite in the way that Burtsev intended.

Dmitri Donskoi, the first Typhoon-class vessel and the largest submarine in the world, served for the past decade as an RSM-56 Bulava ballistic missile testbed. In 2018, it was announced that Donskoi will undergo a deep refit to join the upcoming Borei line as one of two Russian submarine classes to deploy Bulava missiles. Earlier this week, the press office of Russia’s Northern Fleet announced that Donskoi has completed combat trials in the White Sea.

It is unclear if a similar fate awaits Arkhangelsk and Severstal, which were decommissioned in the mid 2000’s and have sat in a Severodvinsk repair port ever since. But even if Donskoi will be the only one to receive this treatment, serious logistical problems persist. Not only is there a heavy upfront bill to refitting as old and large a vessel as Donskoi, but the maintenance costs of a modernized Typhoon submarine would far exceed that of its much smaller and leaner Borei counterparts.

What does the Russian Navy stand to gain from such a daunting and expensive project, involving everything from titanium derusting to nuclear reactor replacement? Prestige, for one. Typhoon is arguably the most feared and renowned submarine line ever constructed by Russia or its Soviet predecessor state; a household name from such classic films as the Hunt for Red October, but also a genuinely potent centerpiece of the Soviet SLBM arsenal from 1981 onward.

There is, however, a technical case for refitting at least one Typhoon vessel. Russia’s emerging modernization model of a lean, local, rapid-response force may be a cost-effective way to guarantee the integrity of Russia’s sprawling coastlines but has increasingly left the Russian Navy without a maritime means of conducting saturation strikes in a high intensity combat setting.

Burtsev notes that Russia’s current submarine lineup compares unflatteringly with the refitted US Ohio-class submarines, capable of fielding a whopping 154 Tomahawk cruise missiles. He adds that even Russia’s surface ships, like the new Admiral Gorshkov class frigates, struggle to match this volume of firepower; the aging, heavily armed Kirov-class Petr Velikiy “battlecruiser” is the sole exception.

Dmitri Donskoi’s Bulava compatibility is largely redundant with the Borei line. This is Burtsev argues that, while Typhoon submarines were originally designed to launch ballistic nuclear missiles, refitting them for saturation strike capability with P-800 Oniks, Zircon, or Kalibr missiles would go far in helping the Russian navy to achieve parity with their US counterparts in this area.

This, to be sure, is not a new or novel idea, nor does it necessarily justify the immense costs and technical challenges involved. It may, however, be the least bad option; if Russia is intent is salvaging Donskoi, converting it into cruise missile carrier can potentially fill an increasingly underserved niche in Russia’s naval roster.