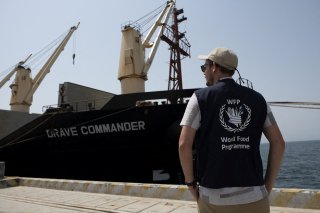 The UN World Food Programme (WFP) indicated on Tuesday that it had partnered with the government of Zimbabwe to implement a relief program for roughly 700,000 Zimbabweans at risk of food insecurity following a failed harvest and a steep increase in grain prices following Russia’s invasion of Ukraine in February.

In addition to the 700,000 central recipients, the WFP is expected to provide additional food aid to roughly 3.8 million Zimbabweans, nearly one-fourth of the country’s total population, according to Reuters.

Zimbabwe’s current government indicated in the aftermath of a new round of crop failures that it expected its annual maize harvest to decrease to 1.56 million tons for 2022—down from 2.72 million tons in 2021, following a lack of rainfall. Zimbabwe needs an estimated 2.2 million tons to feed its people and animals, leading it to seek alternative grain sources on global markets and from the United Nations. A representative from the WFP claimed that the agency had budgeted $40 million to assist vulnerable Zimbabweans from October, when most households are projected to run out of food, until March, when the country’s harvesting season typically begins.

“I do not think this is a famine as yet,” WFP representative for Southern Africa Francesca Edelmann told Reuters. “But that does not mean that it is good. … We are working with [the Zimbabwean] government on a joint plan for the food deficit medication program.”

Edelmann added that the WFP’s estimate of 3.8 million Zimbabweans needing food assistance had significantly increased from 2.9 million the previous year, placing the government’s ability to provide for all of them in doubt.

Zimbabwe, once a major food exporter in southern Africa, saw its agricultural output significantly deteriorate in the early 2000s after the government under longtime leader Robert Mugabe seized white-owned farms and distributed them to loyalists of the ruling ZANU-PF party. The decision to expropriate the farms led Zimbabwe to slip into triple-digit inflation, and to combat the decreasing value of the Zimbabwean dollar, the country’s central bank printed progressively larger quantities of dollars, causing hyperinflation and a currency crisis that ended with the Zimbabwe dollar’s abolition for roughly a decade before its reintroduction in 2019.

Although Mugabe was overthrown by his vice-president, incumbent president Emmerson Mnangagwa, in late 2017, the new government has struggled to grow the Zimbabwean economy and incentivize foreign investment. The new government has also grappled with rising inflation, estimated at roughly 300 percent per year in August.