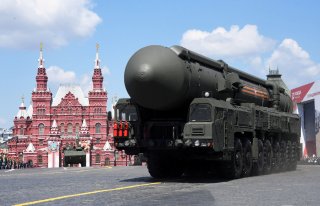 United Nations Secretary-General António Guterres called for the end of “nuclear blackmail” in a speech on Monday, as international tensions ratcheted up over Russia’s escalating war in Ukraine, according to a new Axios report.

“Now, decades after the fall of the Berlin Wall, we can hear once again the rattling of nuclear sabers,” Guterres said during an event to commemorate the International Day for the Total Elimination of Nuclear Weapons, which has been observed since 2013.

“Nuclear weapons are the most destructive power ever created. They offer no security—just carnage and chaos. Their elimination would be the greatest gift we could bestow on future generations,” he continued. “Let me be clear. The era of nuclear blackmail must end. The idea that any country could fight and win a nuclear war is deranged. Any use of a nuclear weapon would incite a humanitarian Armageddon. We need to step back. Without eliminating nuclear weapons, there can be no peace. There can be no trust. And there can be no sustainable future.”

Csaba Kőrösi, president of the UN General Assembly, noted at the same event that Russia’s war in Ukraine has certainly ramped up the risks of a global nuclear disaster.

“I am particularly appalled by the recurring, thinly veiled threats of nuclear strikes,” he said. “Tactical strikes, it is often added, but we all know that such a conflict would never stay at the tactical level.”

The UN chief’s speech came days after Russian president Vladimir Putin threatened that he would not hesitate to use nuclear weapons to protect his country.

If Russia's “territorial integrity” was threatened, “we will certainly use all the means at our disposal” to retaliate, Putin said in an address to his nation last Wednesday.

Then, on Saturday, Russian foreign minister Sergei Lavrov said during a news conference that Russia has “a doctrine for nuclear security which is an open document.”

Meanwhile, this past weekend, Secretary of State Antony Blinken and National Security Adviser Jake Sullivan warned of “catastrophic” consequences if Russia decides to use nuclear weapons in Ukraine.

“We have been very clear with the Russians publicly, and, as well as privately, to stop the loose talk about nuclear weapons,” Blinken said in an interview on CBS News’ 60 Minutes. “It's very important that Moscow hear from us and know from us that the consequences would be horrific. And we've made that very clear.”

Sullivan told NBC News’ Meet the Press that the consequences “would be catastrophic if Russia went down the dark road of nuclear weapons use.”