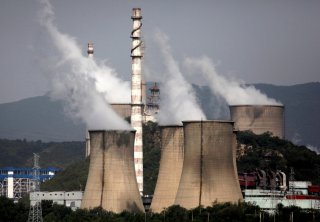 The United Nations recently pressed China to develop “ambitious” goals to curb its negative impacts on the environment ahead of the COP26 climate change conference.

China is known to emit more greenhouse gases than all other industrialized nations combined. According to a report published by the Rhodium Group, a research and consulting firm, China is now responsible for more than 27 percent of total global emissions, while the United States accounts for 11 percent and India is responsible for 6.6 percent. The firm added that China’s emissions have more than tripled during the past three decades.

“I commend President Xi Jinping for announcing at the 76th Session of the U.N. General Assembly that China will end financing of coal-fired power plants abroad and direct support to green and low carbon energy,” U.N. Secretary-General António Guterres stated during a ceremony celebrating the fiftieth anniversary of China’s permanent seat on the United Nations Security Council.

“We must do everything possible to keep the 1.5-degree goal of the Paris Agreement alive. I appeal for China’s presentation of an ambitious Nationally Determined Contribution in the run-up to COP26 in Glasgow,” he continued.

Through the Paris agreement, which China signed, nearly two hundred countries approved a plan aimed at keeping the planet from exceeding 2 degrees Celsius of warming above pre-industrial levels. The agreement also highlighted increased efforts to keep warming below 1.5 degrees Celsius.

However, according to the Lancet’s annual Countdown on Health and Climate Change, greenhouse gas (GHG) emissions, which are “driven to a large extent by the burning of fossil fuels (e.g., coal, oil, and natural gas), have already warmed the world by an average of 1.1 degrees Celsius compared to pre-industrial temperatures. The long-predicted consequences of climate change are unfolding, and an urgent reduction in GHG emissions is required to try to avoid reaching 1.5 degrees Celsius within the next two decades.”

The grim report went on to warn that “there is no safe global temperature rise from a health perspective. … Today’s adverse health impacts of climate change are varied and widespread. All of us have been or likely will be affected by climate change, with some hazards more easily recognizable than others. Climate change is worsening heatwaves, amplifying droughts, intensifying wildfires, supercharging hurricanes, and fueling flood risk through increased heavy rainfall events and rising sea levels.”

The recently released National Intelligence Estimate (NIE) on climate change has sounded the alarm that rising temperatures, droughts, and extreme weather that are associated with climate change will likely lead to growing international tensions.

“We assess that climate change will increasingly exacerbate risks to U.S. national security interests as the physical impacts increase and geopolitical tensions mount about how to respond to the challenge,” the NIE stated.

“Intensifying physical effects will exacerbate geopolitical flashpoints, particularly after 2030, and key countries and regions will face increasing risks of instability and need for humanitarian assistance,” the report added.