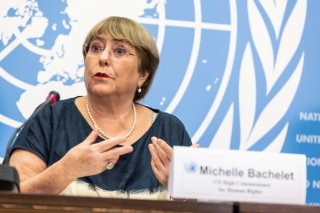 United Nations (UN) High Commissioner for Human Rights Michelle Bachelet indicated during her final press conference on Thursday that the international organization’s human rights commission had experienced “tremendous pressure” regarding her upcoming report on human rights in China’s Xinjiang Uygur Autonomous Region—both from those requesting the publication of the report and those urging her to cancel its release—likely resulting in a further delay of the report’s release.

“We’re trying very hard to do what I promised,” Bachelet said, referring to an earlier vow that she would publish the UN report before her four-year term as High Commissioner ended on August 31. However, she added that the “tremendous pressure” from both sides of the debate had complicated her decision. The high commissioner and former president of Chile noted that she had received a letter signed by the representatives of forty different countries urging her not to publish the report, as well as dozens of other messages urging her to publish it on schedule.

“You cannot imagine the number of letters, meetings asking for the publication,” she said. “Huge amounts…every day, every time.”

Bachelet insisted, however, that these missives would not affect her decision. “I have been under tremendous pressure to publish, or not to publish, but I will not publish or withhold publication due to any such pressure,” she said.

Instead, Bachelet argued that the main factor driving the report’s publication date was the need to “carefully review” the comments submitted by the Chinese government in response to the UN’s initial findings. China has been accused of imprisoning roughly one million of the region’s native Uyghurs in concentration camps and subjecting them to forced labor and sterilization—a campaign that the U.S. State Department and other Western nations have described as a “genocide,” although Beijing vigorously disputes this.

The report’s publication also comes after Bachelet’s visit to Xinjiang in May as part of a scheduled six-day tour of China. At the time, the U.S. government warned that it was “deeply concerned” that the UN delegation would be kept on a tight leash by the Chinese government; State Department spokesman Ned Price emphasized that Washington had “no expectation” that Beijing would “grant the necessary access required to conduct a complete, unmanipulated assessment of the human rights environment in Xinjiang.”