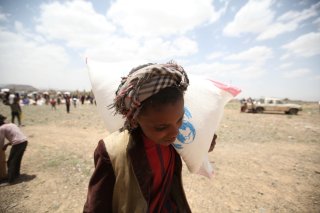 The United Nations is seeking $3.9 billion in donations to continue its humanitarian programs in Yemen in 2022, according to a top UN official.

Ramesh Rajasingham, the acting assistant secretary-general for Humanitarian Affairs and deputy emergency relief coordinator, told the UN Security Council that the body’s “biggest constraint right now is funding” with regard to its programs in Yemen.

“I call on all donors to sustain—and if possible to increase—their support this year,” the official added, noting that the program had only received 58 percent of the budget it needs to operate last year. Rajasingham argued that funding shortfalls have directly impacted Yemenis’ lives, noting that “vital programs” including access to clean drinking water, reproductive services, and security saw cutbacks in recent weeks.

Because of budget cuts, the UN World Food Programme’s mission in Yemen was forced to cut its assistance programs and provide reduced rations to 8 million Yemenis.

Humanitarian aid is often difficult to provide in Yemen, where an ongoing civil war has leveled much of the country’s infrastructure and caused widespread poverty and famine. A Saudi-led military intervention failed to end the conflict, and while Saudi Arabia’s leaders have sought to extricate themselves from Yemen in recent months, they have continued to maintain a strict blockade on the country.

Although the war has reached an effective stalemate—with the Iranian-backed Houthi rebels occupying the country’s north, the Southern Transitional Council secessionist group controlling the city of Aden in the south, and the internationally recognized government of Abdrabbuh Mansour Hadi controlling the rest—it has continued unabated, with Houthis fighting against government forces for control over the oil-rich Marib province.

UN envoy to Yemen Hans Grundberg suggested that violence in the country was “entering an escalatory cycle, with predictable devastating implications for civilians and for the immediate prospect of peace.” He estimated that 350 Yemeni civilians had been killed in December and at least 15,000 had been displaced by violence.

Grundberg emphasized that there would be “no sustainable long-term solution [to the conflict] to be found on the battlefield,” and argued that all sides should open negotiations to end the war, “even if they are not ready to put down their arms."