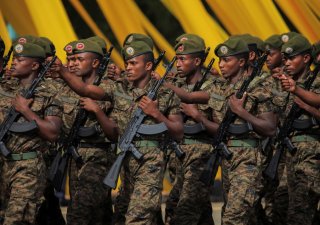 A new United Nations (UN) report has implicated the government of Ethiopia in war crimes during the conduct of its two-year war in the country’s northern Tigray region against the secessionist Tigray People’s Liberation Front (TPLF).

The report, issued by the International Commission of Human Rights Experts on Ethiopia, claimed that it had found evidence of extrajudicial killings and rape by government forces during the course of the war in Tigray. It also observed that Addis Ababa had played a role in restricting food, medicine, and access to humanitarian aid within Tigray by blockading the region and obstructing its connections to the outside world. An estimated twenty million people within Tigray are thought to need emergency humanitarian assistance, most of them women and children.

“The combined effect of these measures … has forced much of the population in Tigray to eat less and sell harvest and reproductive livestock,” the report read. “Sources also reported an increase in desperate means to survive, such as child marriage and child labor, human trafficking, and transactional sex.”

The report also condemned Tigrayan forces for their conduct, accusing the group’s soldiers of stealing humanitarian aid intended for civilian populations. It called on the TPLF to “ensure that humanitarian agencies are able to operate without impediment.”

In spite of its accusations against the TPLF, the group’s representatives celebrated the report, with spokesman Getachew Reda claiming that it “ha[d] always maintained” the allegations against the Ethiopian government, according to AFP.

Ethiopia’s civil war, once confined to Tigray, has since spread beyond the region after a series of TPLF successes led it to invade southward—briefly causing panic in Addis Ababa and leading to a plan that involved distributing weapons to the public. The TPLF’s battlefield successes have also prompted greater unrest among other ethnic separatist groups within Ethiopia, including the Oromo Liberation Army (OLA).

Although the worst of the fighting was contained from March onward following the successful negotiation of a temporary truce, it collapsed in early September, leading to further full-scale fighting. Representatives from the African Union (AU) have sought to reinstate the ceasefire, and both sides have agreed to allow the international organization’s mediation.