Unavoidable: Nothing Can Escape the Block V Tomahawk Cruise Missile 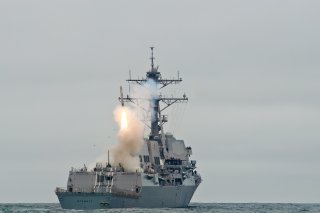 By traveling at lower altitudes parallel to the ocean’s surface, Tomahawk cruise missiles are engineered to elude enemy ship radar systems. The Block V Tomahawk, a tactical cruise missile, is the most modern, cutting-edge variant which introduces new guidance technology that enables the weapon to quickly adjust its trajectory to strike moving targets.

The newly-announced $200 million Navy deal with Raytheon allocates seventy missiles for the Navy, fifty-four for the Marine Corps, and thirty for the Army.

The Tactical Tomahawk, as it is called, has been in development for many years as a key Navy effort to expand ship commanders’ attack envelope. Block IV Tomahawks, which are now operational, have performed well in combat for many years and can travel as far as 900 miles at speeds up to 500mph. The Block IV uses a loitering “targeting” ability and a two-day data link which enables an intelligence, surveillance, and reconnaissance (ISR)-type capability. Tomahawks have often been the first weapons to fire in a number of combat engagements given their precision, stand-off range, and advanced targeting technology. However, since their inception, Tomahawks have only been capable of hitting fixed targets such as buildings, command and control centers, or weapons depots. They were used extensively in Operation Iraqi Freedom as part of the United States’ “shock and awe” campaign to disable Iraq’s infrastructure prior to a ground invasion.

It is quite significant, therefore, that the Block V Tomahawk offers the capability to maneuver and course-correct in flight; such capabilities offer the Navy new opportunities to attack moving enemy ships at long ranges with precision targeting. Certainly, fighter jets capable of firing air-launched precision weapons such as air-to-surface missiles and emerging systems such as Long Range Anti-Ship Missile (LRASM) introduce new options for ship commanders hoping to attack moving targets at sea. A Tactical Tomahawk, however, brings several unprecedented advantages: First, a weapon built to fly at lower altitudes parallel to the surface of the ocean or ground to elude Soviet air defenses, Tomahawks can be difficult to defend against. Second, a ship-fired Tomahawk able to hit moving ships from the surface would eliminate the risks associated with attacking from the air as well as enable previously unprecedented stand-off ranges.

Given these variables, the Block V Tomahawk aligns with the Navy’s Distributed Maritime Operations (DMO) strategy by enabling networked, precision attacks from disaggregated formations that are less vulnerable to enemy fire. This is the core of the DMO concept. By securely networking ships, drones, aircraft, and other platforms across great distances, the Navy intends to increase its operational envelope; improve its survivability by decreasing exposure to incoming fire; and optimize technological advances afforded by new precision-guidance, manned-unmanned teaming, and networking technologies.