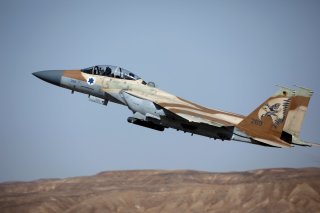 All indications coming from the negotiations in Vienna suggest the Biden administration is prepared to make deep concessions to Iran by rejoining an agreement that leaves the clerical regime capable of building nuclear weapons within the decade.

Military action is no one’s first choice, but it is the last chance to prevent an aggressive, theocratic state from securing nuclear weapons and carrying out Vladimir Putin-style neo-imperialism in the Middle East.

Putin’s Russia has used the threat of nuclear weapons to scare the EU, NATO, and the United States into not acting against his invasion of Ukraine. Sadly, the West has largely capitulated. All of this helps to explain why U.S. allies in the Middle East realize they can’t rely on the Biden administration to stymie Iran’s nuclear ambitions. Dictatorships like the regime of Supreme Leader Ayatollah Ali Khamenei do not honor international agreements.

Prior to the rise of an expansionist Iranian regime determined to join the club of nuclear nations, it would have been almost inconceivable for Israel to host a summit with its Sunni Arab neighbors as it did in the Negev in late March.

The time is ripe for a military coalition of Israel and its Arab partners to announce, at a joint press conference in Vienna, its public opposition to a renewed nuclear deal. Moreover, it is time to start the saber-rattling process; the coalition should announce that it has developed war plans to target Iran’s atomic weapons facilities.

In 2020, Israel signed diplomatic normalization agreements with the United Arab Emirates, Bahrain, Sudan, and Morocco. These accords, taken together with Israel’s long-standing diplomatic relations with Jordan and Egypt, mean the Arab world can deliver formidable resistance to efforts to revive a horrifically misguided nuclear accord.

In a deadly serious illustration of the fact that reviving the Joint Comprehensive Plan of Action (JCPOA), the formal name for the deal with Tehran, will set off a nuclear arms race in the world’s most volatile region, Prince Turki Al Faisal Al Saud, the former director-general of Saudi Arabia’s General Intelligence Directorate, said in September that the Gulf Cooperation Council states might decide to build atomic weapons in response to the pro-Iranian JCPOA.

“I believe that they have the capabilities to do it,” Prince Turki said about the Sunni countries’ technical wherewithal.

“I don’t believe that [the JCPOA] will [stop Iran]. Even in the first agreement, there were indications that the agreement only delayed [Tehran’s nuclear progress] by 10-15 years—depends on who interprets it—Iran’s uranium enrichment and other nuclear activities,” he said.

The stakes cannot be exaggerated for the countries in the Middle East that will be directly affected by an aggressive, nuclear-armed Iran—a country that has been repeatedly classified by both Democratic and Republican administrations as the leading international state-sponsor of terrorism.

The irony of the nuclear talks in Vienna is that the accord, which aims to temporarily blunt Iran’s nuclear ambitions, will ensure the proliferation of mankind’s deadliest weapons in the Middle East.

Saudi Arabia and Israel have held diplomatic meetings over the years. It is imperative that the kingdom—an economic powerhouse—joins the coalition to stop the rehabilitation of an agreement that provided Tehran with a pathway to building an atomic arsenal.

A joint statement rejecting the current terms of the JCPOA from a broad-based coalition of Sunni countries from the Middle East and North Africa, along with the world’s only Jewish state, would have a significant impact. The countries should put muscle behind the statement and consider using their economic leverage against the western European states that are zealously pushing the United States to re-enter the JCPOA.

Russia, China, Germany, Britain, and France—and, of course, Iran—form the group of nations that remain wedded to the idea of America rejoining the accord.

Robert Malley, Biden’s chief negotiator in Vienna and the U.S. special representative for Iran, is eager to remove the anti-terrorism and financial sanctions imposed on Tehran by the previous administration. The United States’ “maximum pressure” sanctions campaign under the Trump administration showed results, including social and labor unrest in the nation of eighty-three million. Disturbingly, Malley seeks to remove sanctions on the Islamic Revolutionary Guard Corps, an entity responsible for the murder of hundreds of U.S. military personnel.

Israel and the Arab states are on the same page when it comes to the need to halt Tehran’s drive for nuclear weapons. The chance to forge a unified front of Arabs and Israelis against the flawed Iran deal should not be squandered.