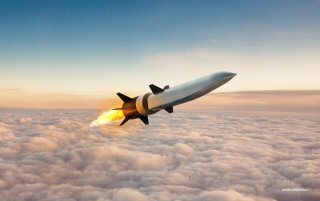 There are several different kinds of hypersonic weapons in development in the United States and abroad that rely on various profusion systems. In the case of the HAWC, the missile relies on a scramjet or supersonic combustion ramjet-type engine to compress air and combust a fuel-air mixture. However, unlike most jet engines that depend on sets of rapidly spinning compressors to rapidly compress air, the HAWC engine's internal contours compress air once released by an aircraft at high speeds.

Faster than a Speeding Bullet

Not only are hypersonic missiles like the HAWC incredibly fast, but they're also highly maneuverable during their terminal flight phase, a factor that makes them difficult to take down with conventional air defenses and contributes to missile survivability. In addition, the potential kinetic energy generated by hypersonic missiles is so great, they do not necessarily need to be armed with an explosive warhead, as the impact force they generate is immense.

"The HAWC free-flight test was a successful demonstration of the capabilities that will make hypersonic cruise missiles a highly effective tool for our warfighters," a HAWC program manager explained in the DARPA press release. "This brings us one step closer to transitioning HAWC to a program of record that offers next-generation capability to the U.S military."

DARPA's press release stated that the flight tests goals were "vehicle integration and release sequence, safe separation from the launch aircraft, booster ignition and boost, booster separation and engine ignition, and cruise," and affirmed that "all primary test objectives were met."

As a concept vehicle, the HAWC is more of a technology demonstrator than a missile prototype. Still, by validating hypersonic hydrocarbon-powered flight and managing thermal stress, the Air Force is a step closer to fielding a viable hypersonic weapon.

"HAWC's successful free-flight test is the culmination of years of successful government and industry partnership, where a single, purpose-driven team accomplished an extremely challenging goal through intense collaboration," a HAWC official stated in DARPA's release. "This historic flight would not have been possible without the dedication of industry, U.S. Air Force, and Navy flight test personnel who persevered through the pandemic to make the magic happen."