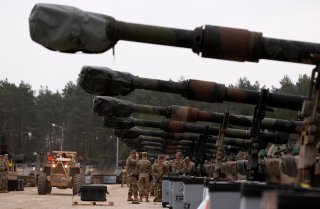 The new deployment includes the U.S. Army’s 1st Armored Brigade Combat Team from the 3rd Infantry Division based in Fort Stewart, Georgia. The troops are expected to deploy from the United States in the coming days.

This deployment means about 12,000 total American troops will be deployed from the United States to provide reassurance for European allies amid Russia’s invasion of Ukraine. They join about 80,000 U.S. military personnel who were already based in Europe.

The Pentagon recently deployed a group of F-35 Lightning II fighters to Germany to bolster its presence. U.S. Army stryker units had also deployed to Romania and Bulgaria.

Many NATO member states, such as the Baltics, continue to be concerned about Russian aggression due to their proximity to Russia and their small military forces. Poland shares a long border with Ukraine and Belarus and also abuts Kaliningrad, a Russian exclave on the Baltic Sea. Part of Russia’s invasion of Ukraine was launched from Belarus’ southern border. Russia’s shortest route to Kyiv, the capital of Ukraine, came from its forces in Belarus.

Sending more forces to Europe in support of NATO reinforces the Department of Defense’s commitment to NATO allies. However, the Pentagon has been clear that American troops will not be deployed to defend Ukraine. The United States’ goal is to reassure and bolster its NATO allies.

The total number of NATO military personnel in Europe now totals more than two million, according to the press release. About 190,000 Russian troops are believed to be deployed in the region to participate in the invasion of Ukraine.