The United States Is Closing the 'Hypersonic Gap' 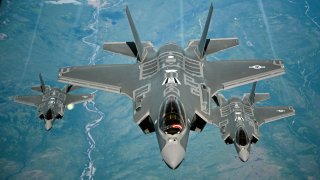 Russia’s use of hypersonic weapons in warfare represents a new development in the history of modern conflict and introduces a previously unprecedented speed of attack. As there may have been little actual tactical rationale for using hypersonic weapons against Ukraine, using them appears to have been an intimidation tactic to show the United States, NATO, and the world that it now operates with a margin of military superiority.

Hypersonic weapons present paradigm-changing levels of high-speed attack. Traveling at five times the speed of sound, defenders have little to no time to identify, track, and defend against incoming hypersonic attacks.

U.S. Army weapons developers suggest that the United States is “number three” in the world of hypersonic weapons, behind both Russia and China. Although this is potentially alarming, there are a few other things to consider regarding hypersonics. First, the United States is quickly progressing with its own hypersonic weapons arsenal and plans to deliver the ground-launched Long Range Hypersonic Weapon (LRHW) by 2023. Eight missiles will travel in a mobile battery and operate with the ability to hold long-range targets at risk of ultra-high-speed hypersonic attack. The new LRHW will also be deployable aboard an Air Force C-17 cargo plane, making it capable of expeditionary operations and rapid mobilization. LRHW developers are working intensely to achieve an ambitious timeframe amid the current global threat environment. Army developers are also thinking forward and pursuing innovations to enable hypersonic weapons to hit maneuvering targets, something that has not been possible thus far.  Senior Army weapons developers call this a “tech insertion,” indicating that sensor and software upgrades can modify the weapon’s flight guidance and targeting systems to introduce the ability to track mobile targets. This would, of course, be highly significant for ground commanders looking to maneuver into new positions and hold advancing enemy targets at risk.

At the same time, the Air Force continues to make rapid progress with its Air-Launched Rapid Response Weapon, or ARRW, a fighter jet and airplane-mounted weapon able to fire at ground targets at high speeds. Hypersonics increase survivability to a large degree because launching an attack means giving up your combat location, as an enemy can detect it at the moment of launch. However, hypersonics’ speed of travel means the launching area will have a much better time window through which to relocate and escape detection.

Therefore, even if Russia has any advantage in the realm of hypersonics, the Pentagon is apparently extremely close to closing it.