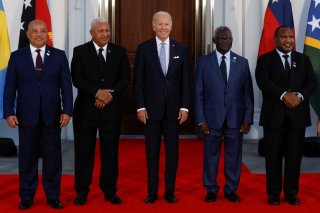 The U.S. government announced on Thursday that the United States had agreed on a political and economic partnership with more than a dozen small Pacific Island nations, according to the Washington Post—a move likely intended to outmaneuver China, which has sought to tighten

its relations with those nations in recent months.

The announcement comes amid a two-day summit between President Joe Biden and leaders and officials from fourteen Pacific island nations, including President Manasseh Sogavare of the Solomon Islands, who raised concerns in the West after he signed a sweeping security deal with Beijing earlier in the year.

According to the Post, the U.S.-Pacific partnership will reportedly include more than $860 million in new investments and aid programs for the islands. The White House did not comment on that number, although Reuters later quoted an anonymous U.S. official confirming its accuracy. In addition to economic aid, the White House announced that it would open three new diplomatic missions on the islands, re-establish the U.S. Agency for International Development mission in Fiji, and create a new ambassadorial position to the Pacific Islands Forum, a regional intergovernmental organization.

Speaking to the delegations, Secretary of State Antony Blinken claimed on Thursday that they had “come together around a declaration of partnership,” which he claimed would lay out a “shared vision for the future and a determination to build that future together.”

“What I hope that you take away from these engagements is that the United States shares your vision, and we are committed to help realize it,” Blinken said. “It’s a vision that recognizes that only by working together can we actually tackle the biggest challenges of our time … from combating the climate crisis and health emergencies, to promoting economic opportunity, to preserving a free and open Indo-Pacific where every nation … has the right to choose its own path.”

Washington’s outreach to the Pacific islands has come amid increasing diplomatic activity and political outreach by Beijing, which has framed itself as a useful trade partner and source of foreign aid. The region has traditionally had closer relations with the United States and Australia, and both countries have viewed China’s outreach with growing hostility. Some of the island nations’ leaders are reportedly suspicious of China’s intentions but wish to avoid becoming embroiled in a proxy conflict involving both Washington and Beijing.

The focal point of Western opposition to China’s aims in the Pacific has been the Solomon Islands. Defense officials in Washington and Canberra have warned that China might attempt to parlay its security partnership with the Solomon Islands into a permanent military presence there. However, Sogavare and spokespeople for the Chinese foreign ministry have denied this.