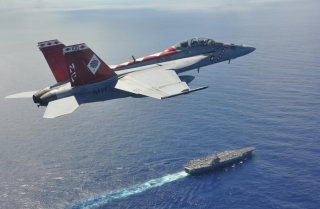 A new bipartisan consensus on China has finally come to fruition, with both parties recognizing Beijing as a threat to the U.S.-led world order. The indications of this consensus are numerous, from bipartisan support for bills such as the CHIPS Act to President Joe Biden's decision to keep former President Donald Trump’s tariffs on China.

But while this consensus is better than the old consensus—that China would democratize by associating with democracies—it still lacks a key element: how exactly to go about dealing with the challenge posed by the People’s Republic of China (PRC). This dilemma appears in full in Biden’s newly released National Security Strategy (NSS). While the document calls for “constraining Russia,” the goal of “out-competing” China is much more milquetoast. The document calls for three prescriptions to achieve this: investing in America’s capabilities, aligning America’s efforts with its allies, and “compet[ing] responsibly with the PRC.”

All of these rest on one key assumption: that America and America’s allies are, as the NSS puts it, “clear-eyed about the nature of the challenges that the PRC poses.” But, as a result of Biden being wishy-washy about the threat posed by China, there is currently no evidence that the American people or U.S. allies actually are clear-eyed about the threat and are prepared to take it on. America is still tightly coupled to China’s economy. The American people, while distrusting China, are clearly not ready for what could be a prolonged cold war—and America’s allies are, at best, ambivalent about one.

As the United States prepares itself and its allies to step into the arena, America should take inspiration from the first time that it went about setting up a cold war.

After World War II, the U.S. economy was pre-eminent. In roughly the first ten years of the Cold War, the United States protected its own industries while investing in its long-term future. It heavily funded science initiatives and passed massive infrastructure bills. Additionally, the United States was not reliant on the Soviet economy.

Things could not be more different today. While bills like the CHIPS Act and the Infrastructure Investment and Jobs Act are a good start, they are not nearly enough for the United States to decouple from China. America and the West still rely heavily on Chinese products, some of which are quite important, including technology, food, and medical supplies.

The cliche that China makes only cheap plastic is an illusion. If China wanted to destroy the West’s economy, it could (though, granted, not without damage to itself). As such, America should prioritize and protect industries that are critical to national security. Companies operating in these industries should be induced to move back to the United States to allied countries. The United States can do so by employing carrots, like grants and tax incentives, and sticks, like tariffs and the force of law. It should also double down on infrastructure spending, especially by increasing the security of critical infrastructure systems.

The American public is also not in the right mental headspace for a long and possibly painful struggle. At the start of the Cold War, the opposite was true—Americans were ready to be anti-Soviet. Anti-Communism had flourished for decades in the United States. In addition, America had just come out of World War II and had won hard-fought victories that the public believed were worth protecting. If this required a permanent U.S. military presence around the world and multiple wars over four decades—and it ultimately did—then Americans were ready for it.

This mentality is absent today. Yes, Americans increasingly view the PRC negatively, but less than a majority of Americans see China as the greatest threat to the country. This may be because American culture still sells out to China wholesale. Hollywood stars apologize for upsetting China's government, and the film industry has been so entranced by the emerging Chinese market that it has essentially handed creative control over to Beijing’s censors.

The United States can not wait for the public to wake up on its own accord. Building an American mindset that sees China as a Soviet-level threat is crucial; without it, any struggle will be lost before it begins. During the Cold War, economic shocks were caused by anti-Soviet policies. But those shocks were weathered because an anti-Soviet mindset pervaded; even in détente, Americans did not love the USSR. If America embarks upon a new cold war without laying the cultural groundwork and endures economic pain in the process, it could endanger whatever fragile bipartisan anti-China coalition has come into existence.

To build support, the U.S. government must do what it always has done when trying to influence culture. Washington can engage with celebrities and major companies and create media partnerships that push certain messages. More importantly, American officials could simply take a sharper tack with China publicly. During the Cold War, successive American presidential administrations were able to speak to the Soviets while also making clear that the Soviets were the enemy. Today, the U.S. government’s message on China is muddled. The 2022 NSS again demonstrates this in full: labeling Russia as a state to be constrained and China as a state to be out-competed shows that Washington’s priorities are seriously out of whack. You attempt to constrain your enemies; you compete with your friends. While Russia is no friend of the United States, it—with only 10 percent of China’s population and less than 10 percent of its GDP—is clearly not the greatest threat to U.S. national security.

This irresoluteness has done nothing to prepare America’s allies. To prepare for ideological combat with the Soviets, America rebuilt Europe with the Marshall Plan. This had the effect of interconnecting the West’s economies and also of winning the allegiance of key states like Greece and Italy. But even without that spending, Western Europe was already petrified of Soviet power. Even those less amenable to being turned into American vassal states, like France, begrudgingly accepted the need for American help.

Today, America’s allies, by and large, do not want a new cold war with China. They are skeptical of China, some more than others, but are generally unwilling to cut it off immediately. German chancellor Olaf Scholz has flatly declared that there should be no decoupling from China. Partially, this is due to economics and the (temporary) pain decoupling would cause, but it is also due to the fact that America’s European allies, to a degree, served as something akin to loosely independent vassal states during the Cold War. In the post-Cold War era, they’ve had the best of both worlds: more independence from the United States and an American nuclear umbrella. They are in no rush to change that and go back to being seen as American puppets. Should America push its allies too hard, it may be seen as bullying. But if it pushes too softly, it may fail to convey the necessary urgency.

So how should America proceed?

For starters, it should recognize geographic reality: the threat to America’s world order emanates from China in Asia, not from Russia in Europe. Biden’s NSS calls for America to spend the next few decades focusing on containing Russia, which it simply cannot do while also focusing on China. Fortunately, there is an incredibly wealthy and heavily armed group next to Russia: the European Union. Therefore, over the next decade, the United States should finally make the long-discussed but never truly completed “Pivot to Asia.” It should do so with a smile and not by insulting its allies, urging the EU to take more of a starring role in opposing Russia, the country that directly threatens the continent. If the EU does not want to decouple from China, it can instead deal with Russia, which threatens it far more than it does the United States.

The NSS also calls for Ukraine’s integration into the EU, and it is right to do so. While the United States should be willing to invest in the rebuilding of Ukraine, most of that spending should come from Europe. Likewise, in a break from previous administrations, the United States should support the formation of an EU army. NATO becoming a bloc primarily composed of U.S. forces and EU forces (along with the United Kingdom and other member states) frees up America to focus on Asia while also remaining true to its allies.

In closing, American officials should take inspiration from one of China’s most famous thinkers, Sun Tzu, who, in the Art of War, wrote, “He will win who, prepared himself, waits to take the enemy unprepared.” China will be the greatest threat to the American-led world order in the coming decades, but America and its allies are, as of now, woefully unprepared to meet that threat. Currently, the bipartisan consensus in Washington is that China presents a threat. But recognizing a threat exists is not the same as creating a plan to address it. To prepare, American officials should start laying the groundwork.