The United States Must Stand Up to Barzani Blackmail in Iraq 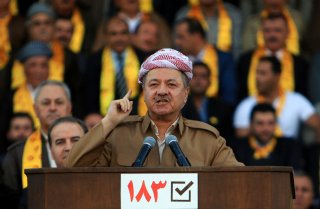 On May 12, 2018, Iraqis went to the polls to elect a new government. Then, as now, political maneuvering consumed months as Iraqis sought first to select a speaker, then a president, and finally a prime minister. Behind the scenes, individuals and party leaders engaged in political horse-trading and brinkmanship, while diplomats from Washington and Tehran sought to ensure that candidates more sympathetic to their interests, if not worldview, found their way into top positions.

During the struggle to form a new government in 2018, Brett McGurk was the U.S. special envoy to counter the Islamic State. But, by dint of his experience in Iraq and personal relationships with Iraqi politicians across the political spectrum, President Donald Trump and Secretary of State Mike Pompeo relied on him to shape U.S. Iraq policy. While the Americans, Europeans, Arabs, and Iranians all largely agreed that Barham Salih was the most capable and politically moderate candidate, McGurk urged Iraqi politicians to choose Fuad Hussein, chief of staff to Kurdistan Democratic Party leader Masoud Barzani. Fuad’s achievements were negligible, and Iraqis perceived his capabilities as lackluster. According to Iraqis present in the meetings, McGurk’s reasoning was that picking anyone besides Barzani’s man would lead Barzani to undermine the broader Iraqi system. This was no idle concern; the year before, Barzani, his uncle, Hoshyar Zebari, and his son Masrour had held an independence referendum across both Iraqi Kurdistan and disputed territories claimed by both Baghdad and Erbil.

For almost twenty years, the State Department has allowed its fear of Barzani’s intransigence to shape American policy in Iraq. In the era of the Coalition Provisional Authority, some current and former U.S. government officials used their contacts in the State Department or Pentagon to run interference for the Barzanis while simultaneously pursuing their own personal business interests. Many other diplomats and military officers—a notable exception being David Petraeus, the commander of the 101st Airborne at the time—would undermine or soft-pedal efforts to instill democracy or punish corruption for fear of upsetting Barzani.

While other Iraqi political leaders would meet high-profile American leaders in Baghdad, Barzani demanded they visit him at his cliff-top palace complex outside of Erbil. The fact that many did allowed Barzani to depict Americans as supplicants. Ironically, assuaging Barzani in this way only increased his ego and sense of entitlement.

Nor has this deference brought regional stability. Nearly two decades after Saddam’s fall, Iraq needs talent. Barzani’s nepotism—and U.S. deference to it—undercuts recognition of that talent by signaling that only the Barzanis are capable. This is one of the reasons why, in November 2021, so many Iraqi Kurds traveled to Belarus—many dying en route—in order to try to cross into Poland. Likewise, those who drowned in the English Channel last November were not refugees fleeing war, but rather Iraqi Kurds seeking to escape the Barzanis’ regime of corruption. It is quite telling when supporters of Shia cleric Muqtada al-Sadr, whose followers often engage in corruption, criticize Sadr for the unseemliness of a political alliance with a family as corrupt as the Barzanis.

To look at the problem from the opposite perspective, it is clear that a willingness to stand up to the Barzanis at any point from 2003 to the present would have very likely bolstered Iraq’s stability. There are legitimate reasons to criticize Barham Salih—the people of Sulaymaniyah, his hometown, are not shy about doing so—but the United States is lucky that McGurk’s maneuvering failed in 2018. There is simply no way Fuad Hussein could have navigated Iraq through the crisis of nationwide protests, the aftermath of Qassem Suleimani’s assassination, and the COVID-19 pandemic. Nor would he have been able to advance Iraq on the world stage in the way that Barham did. Moreover, Barzani proxies would have been unable to act and be accepted as an honest broker by Iraq’s various sectarian, ethnic, and political constituencies, let alone Washington, Tehran, Abu Dhabi, and Ankara.

As McGurk, newly-confirmed ambassador to Iraq Alina Rominowski, and others in the White House, State Department, Pentagon, and CIA work to help Iraq secure itself and set itself on a trajectory for economic stability, it is essential that they stop allowing fear of Barzani intransigence undermine U.S. interests and Iraq’s future. It is time to call Barzani’s bluff and allow him to retire into the dustbin of history where he belongs.