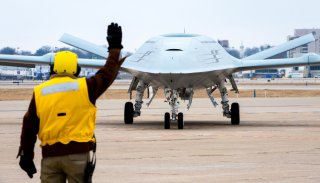 The Navy is further developing their MQ-25 Stingray aerial refueling drone, an odd-looking unmanned vehicle with a unique set of capabilities.

The Navy explains that the “MQ-25 will be the world’s first operational, carrier-based unmanned aircraft and is integral to the future carrier air wing (CVW),” and that the MQ-25 “will provide an aerial refueling capability that extends the range, operational capability, and lethality of the CVW (carrier air wing) and carrier strike group (CSG).”

During the Navy’s recent deck drills with the MQ-25, the Unmanned Aerial Vehicle (UAV) “completed a series of test points that evaluated the functionality and capabilities of the deck handling system during both day and nighttime operations.” The Navy began deck trials earlier this month.

The maneuvers the MQ-25 performed included “taxiing and parking on the flight deck, connecting to the catapult and clearing the landing area. Data was collected related to deck motion and wind over deck impacts to controllability and the propulsion system.”

Although the Stingray is not a purpose-built stealth aircraft, it does incorporate some radar-mitigating features in its design. For example, the refueler’s engine intake is located on the fuselage top, shielding engine fan blades from returning a radar signal. Likewise, the Stingray’s fuselage is contoured to deflect radar and minimize radar returns.

The MQ-Stingray is shaping up to be an important new project for the Navy. Refueling at sea and in the air is crucially vital and allows Navy planes to remain in the air and on station for extended periods of time.

One of the United States’ premiere aircraft, the F-35 Lightning II stealth fighter, has sustained criticism, with detractors pointing to the airplane’s combat radius as a serious weakness inherent to the plane. That is a gap the Stingray could fill.

Earlier this year, an MQ-25 topped off an F-35C Lightning II in the air over Illinois, a program first. The Navy explained that they would like the Stingray to eventually be able to refuel all Navy aircraft currently capable of receiving fuel in the air, providing greater operational flexibility.

Every test brings the Stingray closer to becoming fully mission capable. And, once operational, the Stingray will become the world’s first unmanned aerial refueling aircraft—and a boon to Navy aviation.