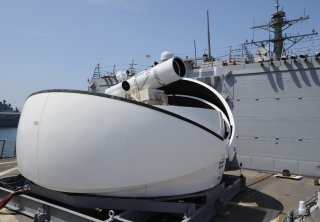 On April 13, the United States Navy announced that it conducted a test of a new laser weapon.

According to a statement released by the Navy, “The ground-based laser system homed in on the red drone flying by, shooting a high-energy beam invisible to the naked eye.”

“Suddenly, a fiery orange glow flared on the drone, smoke poured from its engine and a parachute opened as the craft tumbled downward, disabled by the laser beam.”

The test fire, in February of this year, was the first time that the United States tested what it termed an all-electric, high-energy laser. The target in question represented a “subsonic cruise missile in flight.”

The laser, designed by Lockheed Martin and called the Layered Laser Defense, or LLD, can counter a variety of systems, including fast-attack boats as well as unmanned aerial systems.

“Innovative laser systems like the LLD have the potential to redefine the future of naval combat operations,” the Navy’s chief of Naval Research, Rear Admiral Lorin C. Selby, explained the statement.

“They present transformational capabilities to the fleet, address diverse threats, and provide precision engagements with a deep magazine to complement existing defensive systems and enhance sustained lethality in high-intensity conflict,” he said.

Interestingly, the U.S. Navy explained that there is actually not a concrete plan in place to field the Layer Laser Defense system aboard Navy ships. Instead, the laser “offers a glimpse into the future of laser weapons. It is compact and powerful, yet more efficient than previous systems.

“It has specialized optics to observe a target and focus laser beams to maximum effect, while also incorporating artificial intelligence to improve tracking and targeting.”

The U.S. Navy used the new laser weapon to shoot down high-speed drones, as well as fixed-wing aerial vehicles.

“LLD is an example of what a very advanced laser system can do to defeat significant threats to naval forces,” said David Kiel, a former Navy captain who is a program officer in the Office of Naval Research’s (ONR) Aviation, Force Projection, and Integrated Defense Department, which conducted the laser testing.

“And we have ongoing efforts, both at ONR and in other Navy programs, to keep building on these results in the near future.”

Although the U.S. Navy conducted similar testing of laser weapon technology in the 1980s, those tests involved chemical-based laser weapons, which presented the Navy with fairly significant logistical issues. These most recent LLD tests, however, involve an all-electrical system and offer the Navy to draw from a virtually limitless magazine depth.