The United States is Not Safe from Russian, Chinese Long-Range Missiles 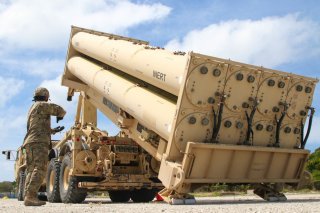 “Our potential adversaries have created significant capacity to reach us asymmetrically. Our forward layers, our allies, our partners, our forward combatant commands and geographic commands, have largely kept those threats away from the United States,” Col. Kristopher Struve, Vice Director of Operations of the North American Aerospace Defense Command, explained. “But as we look into threats from cyber actors, space threats, as well as kinetic conventional cruise missiles, which have significant improvement on the part of China and Russia in recent years, those create avenues that can create havoc in the homeland while we are trying to project our power forward to potentially a regional conflict.”

“So, the thing that I really want to emphasize here is that the homeland is not a sanctuary any longer," he continued. "There are opportunities for our adversaries to employ weapons from distances that they could strike critical infrastructure in the United States early in a conflict and create some challenges for us to produce our military power.”

Deep in the Western Pacific

Unmentioned, though nonetheless, in the middle of this conversation on vulnerabilities is the island of Guam, one of the United States’ westernmost military installations, roughly equidistant from Japan and Australia, and a mere 1,700 miles southeast of Taiwan.

Guam is shaping up to be one of the United States’ most important nodes in the western Pacific. The island hosts several critical military support facilities, including submarine and ship support infrastructure and a large airbase that can host long-range strategic bombers.

“Something that I haven’t really talked about is what are we doing on the risk mitigation front, and that’s the ability for us to actually defend. And there’s two sides that we think about when we think risk mitigation. It’s our ability to deny those threats, and, when we talk about these kinetic conventional weapons, it’s hardening, redundancy, resiliency on some of our critical infrastructure,” Col. Struve explained. “Not every piece of our infrastructure is going to be taken out with one of these conventional-size weapons, but some things are particularly vulnerable. So we view this as a whole-of-government approach on being able to protect that infrastructure.”

Given Guam’s strategic significance and the danger posed to the island by Chinese—and increasingly North Korean—ballistic missiles and hypersonic weapons, upping the island’s air defenses is a priority. Col. Struve largely concurred, explaining that the air force would “place defenses on key critical infrastructure nodes.”

“It’s infeasible that we can place kinetic, you know, surface-to-air missile batteries over the entirety of the United States, Alaska, the Aleutian Islands, and Canada. By the time we fielded such a system, it would probably—they would’ve found a way around it anyways. So we are working closely with OSD (Office of the Secretary of Defense) and the National Security Council on where are we going to place those limited ground-based air defense assets that we’ll have in time of conflict to really change our adversaries’ calculus about their efficacy of being able to execute an attack on the U.S.”

Indeed, the United States has already begun upping Guam’s defensive posture. For example, the United States placed several of Israel’s Iron Dome air defense batteries on the island. Though the deployment is seen as temporary and experimental, one of the United States’ more important military nodes in the western Pacific is taking note of the risks posed by adversaries.