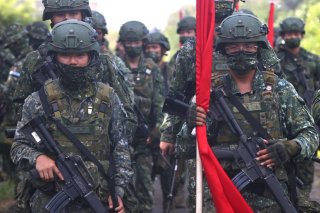 Around two dozen members of the U.S. special forces have been present in Taiwan for at least a year, training its ground and naval troops, according to a new report by the Wall Street Journal.

Reuters later repeated the report, citing anonymous sources who claimed that multiple groups of trainers had rotated into Taiwan.

If true, the report links U.S. troops to Taiwan during a period of sustained escalation of tensions between Taiwan and China, which claims the island as one of its provinces, despite Taiwan’s functioning as a de facto independent state.

Tensions between China and Taiwan have steadily escalated since 2020. Since China’s National Day on October 1, Beijing has flown around 150 aircraft across Taiwan’s air defense identification zone (ADIZ), an area immediately outside its airspace over which it requires all aircraft to identify themselves. The escalation prompted President Joe Biden to commit to a meeting with Xi Jinping, to take place virtually before the end of 2021.

The U.S. Department of Defense pointedly did not confirm or deny the report of U.S. troops’ presence, maintaining its standard policy of ambiguity over issues related to Taiwan. Pentagon spokesman John Supple noted that “our support for and defense relationship with Taiwan remains aligned against the current threat posed by the People’s Republic of China,” and urged Beijing to “honor its commitment to the peaceful resolution of cross-Strait differences.”

Similarly, Taiwan’s Defense Ministry offered no comment on the issue.

Reports of U.S. troops in Taiwan are not new. In November 2020, Taiwanese media claimed that American military instructors had arrived on the island to train Taiwanese marines in amphibious operations. However, the Defense Department denied that specific claim, while offering no comment on the presence of U.S. troops overall. American troops were later filmed taking part in a Taiwanese military exercise, entitled “Balance Temper.”

While the United States remains officially committed to the “One China” principle, it has remained deliberately ambiguous about whether Taipei or Beijing represents “China,” a compromise which has largely mollified both sides. However, while Washington has never formally committed to defend Taiwan against an invasion from the mainland, it has unambiguously helped to prepare Taipei for such an eventuality through arms sales—and the consensus is that it would aid Taiwan directly in the event of an open war with China, although it remains unlikely that this will be directly put to the test.