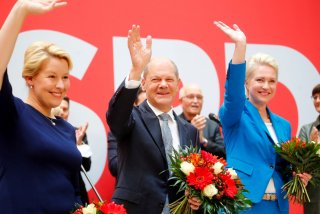 The recent German election allegedly brought an end to the sixteen-year Angela Merkel era. Yet it seems that even though the ruling coalition of parties in the government may change, Germany will remain the stable, prosperous pillar of Europe. This is largely because of Germany’s hybrid electoral system.

Unlike the United States’s separation of powers, Germany has a parliamentary system. However, the system is a hybrid between electing members of the legislature in single-member districts (as in the United States) and proportional representation (parties get roughly the same percentage of seats in the parliament as they got in the popular vote). In contrast to the U.S. system, which has only single-member congressional districts won by a plurality of the vote, proportional representation results in multiple parties being seated in the Reichstag. In the United States, having only single-member districts tends to create a duopoly of two parties, but only one party can win a majority. In Germany, proportional representation allows more parties to win seats, with the governing coalition being negotiated among the parties after the election. Thus, German parties with fewer supporters can still be in the game as kingmakers—for example, the smaller libertarian Free Democrats and the Greens vis-à-vis the larger Social Democrats and Christian Democrats.

But didn’t framers of the Constitution decide that the United States should have a two-party system? No, in fact, the Founding Fathers hated political parties and somewhat naively didn’t think they would be needed if virtuous statesmen were elected by the public. Thus, the Constitution says nothing about political parties, and George Washington and John Adams even decried a two-party system.

For remaining single-member offices, such as the president and senator, ranked-choice voting—instead of voting for one candidate and dismissing the rest, the voter ranks his or her choices—could be adopted that would allow instant runoffs until a majority winner was reached. Thus, voters could make their first choice a minor party candidate without spoiling the chances of their second choice from a larger party. The result would spurt the creation and the strength of new parties.

The American two-party system has evolved into a vitriolic zero-sum game, often with the primary objective being to hate the other party and to defeat it at any cost—even at great cost to the country. With a multi-party system, intense rivalry dissipates, and parties try to win votes primarily by competitively promoting positive programs of action. The Republican Party in 2020, for instance, had no platform for the election, suggesting they did not feel the need to promote positive and competitive programs.

Just as the progressive faction of the Democratic Party might want to split off into a separate party, the remaining small libertarian wing of the Republican Party might want to split off from the Trumpian majority. To do so, and increase their political influence in the process, such factions will need multi-member House districts with proportional representation and ranked-choice voting with instant runoffs for the remaining single-member offices of president and senator. Even better, these reforms wouldn’t require Constitutional amendments. Germany’s stable democracy should teach the United States that such hybrid election systems are workable, provide more complete representation for voters, and more political freedom.