Is an Unjust Peace in Ukraine Better Than a Just War? 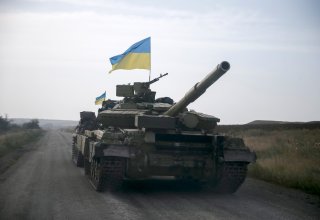 It is naïve to believe that negotiations between Ukraine and Russia could take place as the conflict swings back and forth each day. But the time to begin is fast approaching, and fortune favors the prepared.

While Ukraine will have the final say and should negotiate from strength, the United States and Europe have much at stake, and each country has its own political and economic calculus. This will require some far-sighted statesmanship on the part of Ukraine and steadfast support from America and Europe.

In America, the isolationist wing of the Republicans, the Ukraine doves, needs to be pushed back. But the same goes for the Ukraine hawks on the other end of the spectrum, who seem amenable to a prolonged and costly conflict with no realistic outcome.

As usual, the right approach is to be a conservative internationalist. The key is to deny Russia any benefits for its reckless and lawless behavior while making sure that Ukraine’s security is enhanced by the endgame.

In terms of timing, there are several reasons to begin negotiations over the next few months backed by a united front and aggressive military tactics.

First, if Russia is not responsive or does not demonstrate good faith during negotiations, it strengthens the case for sustained Ukrainian military action.

Second, while European and American support of Ukraine is currently strong, the risk of that support wavering will increase as the conflict continues and the world faces greater economic challenges.

Third, the cost of the war is increasing every day. Ukraine’s infrastructure and economy have been severely damaged and the West has limited resources to care for six million refugees. Of course, Russia’s economic costs are also escalating and will incentivize Moscow to negotiate. A prolonged stalemate will be costly for Ukraine and Russia, as well as for Europe and America.

Fourth, it is a paradox that even if Ukraine achieves its ultimate goal of pushing Russia entirely out of its borders, including Crimea, the risks of nuclear escalation rise considerably. The issue of a large, hostile state with nuclear weapons on Ukraine’s border remains.

While the United States should maintain its current support of NATO, European members need to sharply increase their military contributions and financial support of Ukraine. The recent $40 billion aid package for Ukraine approved by the U.S. Congress, roughly three times the support thus far of the European Union, is unlikely to be followed by another of the same size.

The backdrop to all of this is the U.S.-China rivalry and America’s need for stability and security on both sides of Eurasia. From a Chinese perspective, the Russo-Ukrainian War has complicated its goal of dominating Eurasia and turned its de facto alliance with Russia into a potential liability while increasing its own economic instability at a time of slow growth.

Since China represents Europe’s largest trading partner, the European Union, and Germany in particular, have considerable leverage over China if they have the will to use it. China can repair some of the damage to its already fading brand by bringing Russia to the negotiating table. America also needs the wisdom to continue to support Ukraine while keeping in mind its national interests.

Japan can also pressure China, as the latter is the source of almost 25 percent of Japan’s imports. Japan has demonstrated once again why it remains America’s most important ally in Asia and beyond. Prime Minister Fumio Kishida harshly criticized Russia’s “brutal and inhumane acts” and backed this up by aiding Ukraine and imposing economic penalties and sanctions against Moscow, including freezing the assets of two of Russia’s largest banks.

What might be on the table in Ukraine-Russia negotiations? Such diplomacy begins with Russia moving back to the territorial lines of February 23, sanctions released after Russian troops are withdrawn far from the border, Finland’s membership in NATO, border buffer zones, Ukraine’s membership in the European Union, and a sizable reconstruction fund for Ukraine from the United States, the European Union, and the rest of the world.

One realistic option is that Ukraine could renounce joining NATO and become a non-nuclear, non-aligned country in return for receiving border security guarantees from its Western supporters. While historians prefer to analyze how and why wars begin, how wars end is equally important and never easy. Ukraine doves, hawks, and those in between need the wisdom and courage to heed Roman statesman Cicero’s advice that sometimes “an unjust peace is better than a just war.”

Carl Delfeld is a senior fellow at the Hay Seward Center for Economic Security, and a former U.S. Representative to the Asian Development Bank. His most recent book is Power Rivals: America and China’s Superpower Struggle.