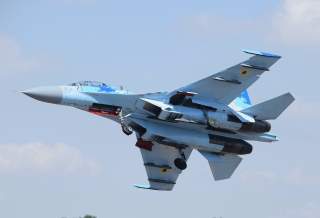 The internet is full of videos and stories about the ‘Pugachev Cobra’ – a ‘dramatic and demanding maneuver’ – usually flown by Russian pilots on diverse variants of the Sukhoi Su-27-family at air shows. Supposedly developed by the Russians, it is an ’impressive trick’, demonstrating the aircraft’s ‘fantastic maneuverability’ etc.

Discussions about its potential use in air combat are at least as endless (think I got fed up of them for the first time in 1995 or so): theoretically, an aircraft flying the ‘Pugachev Cobra’ could suddenly decrease the speed and thus force any pursuer to overshot, i.e. fly in front. And so on…

But, who can say how this maneuver came into being? Who flew it for the first time, when and where, and on what aircraft?

Disclaimer: surprisingly enough, the following reconstruction came into being during the work on the project Arab MiGs – a series of six books published in period 2009-2014, and reconstructing the operational history of Arab air forces at wars with Israel in period 1955-1973. Diverse watchdogs and fanboys should cease reading at this point: for them, the results of all that work was just a mix of ‘revisionist history’ and ‘dismissing everything Israeli’.

When Syria regained its sovereignty the SyAAF had to be re-established from scratch: all the UARAF left behind were two squadrons of MiG-17Fs, four Ilyushin Il-28 bombers, and few transports. A Syrian delegation first toured Western Europe, trying to buy – between others – Dassault Mirage and Fiat G.91 – but, all of its requests were turned down. Eventually, the Syrians ended in Moscow and placed an order for 34 MiG-21F-13s, in June 1962.

In the re-established SyAAF all the unit commanders were selected for their political associations and loyalty to superiors. Due to the lack of clue about tactics and weaponry, commanders of newly established Syrian MiG-21-units were over-reliant on advice from about 30 Soviet advisors assigned to help them work-up. However, a handful of better-connected pilots were able to literally do whatever they wanted to do – including disregarding Soviet advices and orders from their commanders. Precisely this was valid for Mohammad Mansour, then a novice MiG-21-pilot fresh from conversion course in the USSR: his older brother – legendary Fayez Mansour – was well-connected up the chain of command in Damascus. Thus, Mohammad began challenging advices from Soviet advisors and demanding greater operational flexibility for himself and other pilots of his unit.

Experiences from first clashes between Syrian MiG-21s and the Israelis have taught him that there was a need for an effective defensive manoeuvre, designed to spoil cannon attacks. Mind: as of mid-1960s, primary armament of all fighters were still cannons and most of air combats were still fought in form of dogfights in which opponents were attempting to reach a favourable position behind each other. Thus, forcing the enemy to miss or overshoot was essential.

Mohammed’s initial solution was based on Soviet manuals and consisted of rapid descending turns followed by a sudden activation of the afterburner and a climb. However, in the course of one of related test-flights, in early 1967, Mohammad inadvertently pitched the nose of his MiG too hard, so that the forward movement of his aircraft nearly stopped. When he engaged the afterburner his MiG ended ‘standing on its tail’, with the nose pointing almost vertically into the sky, on the verge of flipping out of control. Mohammad recovered on time to prevent a crash, but it was a close call: in order to prevent this from happening again, he decided to try flying the same manoeuvre after engaging the afterburner, so to enable the engine to spool up on time (the Tumansky R-11 was notorious for its slow reaction to throttle movement).

That was the moment that what later became known as the ‘zero speed manoeuvre’ was born.

As far as is known, Mohammad Mansour went on to become the most successful Arab pilot of the June 1967 Arab-Israeli War: he scored at least two, possibly up to four confirmed victories (the biggest success usually associated with him was the downing of two Mirage IIICJs over Almazza, including the aircraft of the CO No. 117 Squadron, IDF/AF, late in the afternoon of Jun. 5, 1967). While not known to have ever used the zero-speed manoeuvre in combat, he was grounded on personal order from Hafez al-Assad following the death of his brother Fayez, in an air combat with the Israelis, in May 1970, and is nowadays living in retirement.

In 1968, when the runway at Muwaffaq as-Salti AB in Jordan was undergoing reconstruction, pilots of the future No.9 Squadron Royal Jordanian Air Force (they were in the process of converting to F-104A Starfighters) were re-deployed to Syria. Together with Jordanians was a pair of Pakistani pilots serving their exchange tours in the Middle East. The latter two (including Ammanullah Khan) saw the manoeuvre: a ‘psssst, don’t tell this to anybody else’-chat later, they joined Mohammed to perfect the zero-speed manoeuvre to a level where this became a ‘standard’ part of defensive tactics of Syrian MiG-21-pilots.

A year later, an Egyptian MiG-17-unit was deployed to Syria to bolster local defences. Muhammed Okasha, the commander of that squadron, saw the manoeuvre being trained by Syrian pilots and asked one of them to teach him how to fly it. Much to displeasure of the Pakistanis (concerned the Egyptians might reveal this manoeuvre to the Indians), Mohammed Mansour did so: it was the second time the ‘pssst, don’t tell anybody else’ rule was broken.

Of course, Okasha brought the zero-speed manoeuvre to Egypt and it soon became a standard defensive manoeuvre for MiG-21-pilots there, too: during the October 1973 War it resulted in such Israeli legends like about a ‘crazy Egyptian pilot’ that stood with his MiG-21 on the tail while trying to evade an attack…

Moreover, it was in Egypt that the Soviets – present in the country in large numbers during their intervention of period 1970-1972 – saw the Egyptian MiG-21-pilots flying this manoeuvre. A ‘pssst, don’t tell anybody else’-session later they brought it to the USSR (together with plenty of other Egyptian refinements of Soviet aircraft).

Of course, 20+ years later, when Pugachev Cobra was flown by Soviet test-pilots for the first time, nobody cared any more about who has originally developed this manoeuvre. Even less so would anybody come to the idea to credit an ‘unknown’ Syrian MiG-21-pilot – Mohammed Mansour – for its invention.