In Upcoming Air Drills, F-35s are the Enemy 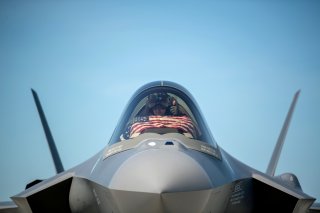 At the Red Flag 21-3 event at Nellis Air Force Base (AFB), F-35 Lightning II pilots will be given the “aggressor” role, creating a daunting training scenario for American pilots, according to a press release published by the U.S. Air Force.

In Air Force combat exercises, the “aggressor” role is given to planes that represent an enemy aircraft force. The press release stated that the F-35 pilots were assigned to “punish” the blue air pilots, representing the United States.

In previous iterations of the exercise, according to Air Force Lt. Col. Chris Finkenstadt, F-16 Fighting Falcon aircraft were primarily used in the aggressor squad. In the Red Flag 21-3 exercises, the F-16s were replaced with F-35s, augmenting their threat capabilities and changing the scenario. Finkenstadt approved of the introduction of the F-35s, highlighting their closer resemblance to modern, fifth-generation enemy aircraft than the aging F-16.

Air Force Col. Scott Mills explained that the rationale for introducing the F-35 into the aggressor squad: “At the end of the day, my job is not to give blue an easy day. My job is to give blue the absolute toughest day that I can. And the way for me to do that is to bring the F-35 into the fight. And the F-35 is going to make it exceptionally difficult for blue to achieve their objectives. They're going to need to take every bit of capability they have, every bit of integration they can, to achieve their intent.” The colonel also underlined the importance of practicing against low-observable type threats, which U.S. adversaries have made great strides in developing in recent years.

Air Force commanders have promoted the effectiveness of the no-holds-barred attitude. Finkenstadt suggested that, “Based on our focus toward great power competition, we need to make sure that those guys are ready, and we do that by presenting the best possible atmosphere we can.”

At the beginning of the exercises, the Air Force indicated that red (i.e. aggressor) air victories were substantial. However, the blue team’s pilots had the benefit of debriefing after each mission, allowing them to conduct a post-mortem on what was done well and what opportunities were missed.

“By the end of week one,” Finkenstadt added, “you start to see their lessons learned are getting passed around and they’re starting to figure things out a little bit. Then, day one or two of week two, they may get their nose bloodied again, because we tend to ramp it up a little bit.”