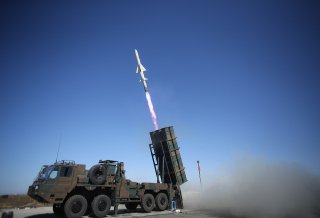 The Japan Self-Defense Forces (JSDF) are purportedly only concerned with the defense of Japanese soil, and have no offensive role. As an island nation, the JSDF is heavily oriented around maritime defense and naval power to defend against invasions from sea.

However, improved sensors, propulsion systems, and communications allow land-based anti-ship missiles to threaten targets hundreds of miles away from a shoreline. These weapons go beyond coastal defense and can threaten ships across broad swaths of littoral waters. These technologies change the outlook of future naval conflicts.

China, a historical rival of Japan and victim of past Japanese invasions, has taken the lead in developing far-reaching land-based anti-ship cruise and ballistic missiles. Tokyo now appears intent on rebalancing the regional threat environment by enhancing the reach of its own anti-ship cruise missile batteries.

Each Type 12 launcher carries six missiles weighing 1,500 pounds that cruise towards the general position of a targeted vessel using a combination of inertia, GPS, and terrain-contour mapping for navigation. The missile skims about twenty feet above the sea, activating a high-resolution active electronically scanned array radar seeker (taken from the AA-4B air-to-air missile) which can determine whether a ship is an appropriate target and home in for the kill.

However, the Type 12 has a limitation compared to China’s latest anti-ship missiles. Its range is only one hundred and twenty-four miles (200 km).

Japanese warships and airplanes already use a variant of this missile called the Type 17 with twice the range at two hundred and fifty miles. But the JGSDF plans to leapfrog that capability with the improved Type 12-Kai model, which boasts a range of five hundred and sixty miles (900 km). The Type 17 is due to complete development by 2025. Further upgrading to more than nine hundred miles (1,500 km) range is believed possible. That would roughly match the range of China’s DF-21D anti-ship ballistic missile.

The range increase is reportedly achieved by modifying the engine and extending the missile’s wings so it can fly at higher altitude. The air is thinner there, resulting in less drag.

However, higher-flying missiles can be detected at greater distances on radar, giving the targeted ship more warning with which to try to shoot them down. To mitigate this, the Type 12 Kai has been optimized for a reduced radar cross-section. It will likely will be programmed to dive to low altitude in the final phase of flight. In fact, due to improving radars and point-defense systems, modern anti-ship cruise missiles either need supersonic or hypersonic speed (difficult for a long-range cruise missile) or stealth to have good odds of reaching their target.

Another issue bedeviling long-range anti-ship missiles is that ships are moving targets, and may not end up in the missile seeker’s kill box when the weapon closes the distance. As the Type 12 is subsonic and likely flying at around six hundred miles per hour, it could take nearly an hour to reach a target at maximum range, during which time a warship moving at flank speed may have moved more than thirty miles.

Thus, the Type 12 reportedly includes a satellite datalink to receive missile course adjustments from other platforms. While the missile batteries do have their own radars, leveraging the Type 12’s improved range would almost certainly require a concept of operations in which a forward-operating platform engaged in maritime surveillance—such as a submerged submarine, a P-1 patrol plane, or spy satellite—spots targets and relays targeting data to the land-based battery. That could include course corrections transmitted to the missile to account for the movement of the target.

The new weapon’s seeker will also be able to scan surface targets precisely enough to give it land-attack capability. Land-attack cruise missiles are generally considered offensive weapons, but China and North Korea both mass a great deal of firepower on land-based ballistic missiles on trucks or in silos. That means the ability to attack enemy bases is seen as falling within the self-defense mission of the Japanese military.

Reportedly, the Japan Air Self-Defense Force is also interested in adopting the Type 12 Kai. It previously canceled plans to procure long-range cruise missiles built by the United States for its F-15J fighters due to the projected $5 billion cost.

The Type 12 is expected to be deployed on Japan’s F-16-derived Mitsubishi F-2 fighters. An air-launched Type 12 could have greater range due to starting with a speed and altitude boost, and could also approach targets from less predictable vectors. The Japan Maritime Self-Defense Force P-1 maritime patrol planes also reportedly can carry eight Type 12s of the current model.

In addition to the Type 12, a new anti-ship missile provisionally dubbed the Island Defense Surface-to-Ship Missile is reportedly in development by Kawasaki Heavy Industries with an even greater range of 1,242 miles (2,000 km). This missile would further emphasize stealth and may be able to perform evasive corkscrew maneuvers in the terminal phase to avoid interception.

The Type 12 Kai’s capability leap would have major implications in a conflict with North Korea or China. Batteries on the major Japanese islands of Kyushu or Honshu, for example, could threaten ships departing from Shanghai or transiting via the Yellow Sea to the Pacific. They could also attack targets on land anywhere in North Korea.

Three Type 12 batteries are also central to Japan’s plans to fortify the Ryukyu Island chain, which could greatly constrain the mobility of the Chinese Navy in wartime. Furthermore, Ishigaki Island lies just one hundred and thirty-five miles east of Taiwan. If Japan sought to assist Taiwan militarily, missiles on Ishigaki (and a radar station on nearby Yonaguni Island) could protect Taiwan’s northeastern and eastern flanks from hostile vessels.

Unsurprisingly, Chinese commentators see Japan’s long-distance strike capability as menacing and portending aggressive intent. But the People’s Liberation Army Rocket Force already possesses a much larger, farther-reaching arsenal in its mobile land-based ballistic and cruise missiles. Furthermore, the number of launchers and missiles procured by the JGSDF matter too; the current seven operational batteries could exhaust their missiles quickly in a shooting war, necessitating selective use of their capabilities.

Ultimately, Japan’s investment in the Type 12 is a bid to maintain a dynamic of mutual vulnerability during a time when long-distance missiles are disrupting established relationships between air, sea, and land power.