Is the U.S. Air Force’s New B-21 Raider Stealth Bomber Flying Over Area 51? 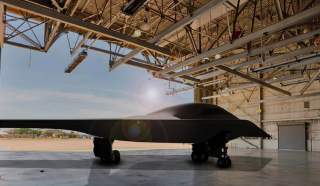 An amateur plane-spotter in Nevada told his local news that the U.S. Air Force’s B-21 Raider stealth bomber already is flying over the service’s secretive Area 51 test range.

“No, it’s been flying for years out of Area 51, right over these hills,” Arnu said of the B-21. Arnu lives in Rachel, Nevada, not far from Area 51’s perimeter.

But there are good reasons to doubt Arnu’s story. For one, he and KLAS News demonstrated a serious lack of understanding regarding the B-21’s development.

KLAS News claimed the B-21 was supposed to enter service in the mid-2020s but the Air Force “moved up the timeline” for a first flight as early as 2021.

In fact, the bomber has been on track to enter service in the mid-2020s ever since the flying branch back in 2015 cut Northrop Grumman the contract to develop the B-21. A first flight is not the same thing as “entering service.” The F-35A stealth fighter first flew in 2006 but didn’t enter service with the Air Force until 2016.

Moreover, Arnu himself admitted he hasn’t actually seen a bomber. “I’ve seen things fly at night, and you have no idea what it is,” Arnu said. “I have not seen it in a way you could identify it.”

The Air Force has been highly protective of the details of the B-21’s design. The only images the service has released depicting the new bomber are artists’ impressions.

But service leaders unequivocally have said that the first bomber, likely a semi-operational prototype, by mid-2019 was under construction at Northrop’s facility in Palmdale California.

Air Force vice chief of staff Gen. Stephen Wilson in July 2019 said he recently had visited a Northrop facility in Florida and that the company was “moving out on [the B-21] pretty fast.”

Wilson said he has an app on his phone “counting down the days” until the bomber’s first flight, which he at the time estimated to be 863 days away. In other words, in late 2021.

It’s entirely possible the Air Force built a large, bomber-like demonstrator plane during the roughly 15-year period ending in 2015 when it struggled to define requirements for a new stealth bomber.

Former Aviation Week reporter Bill Sweetman even identified a $2-billion budget line item that could have paid for a bomber demonstrator as long ago as 2008. A subsequent, largely unexplained sighting of large, flying-wing warplanes over Texas in 2014 piqued observers’ curiosity.

There’s no doubt the Air Force’s “black budget,” which pays for classified programs and totals tens of billions of dollars annually, pays for high-tech prototype airplanes.

But spending on the B-21 isn’t classified. With each of as many as 150 B-21s likely to cost around $600 million, there’s no way the Air Force can keep the bomber’s budget under wraps. After all, Sweetman explained in a 2014 op-ed, “secrecy creates its own problems.: high costs and weak oversight.”

“If the technology works well, secrecy can inhibit its deployment,” Sweetman added.

At present, there’s no indication the B-21 doesn’t work well. The Air Force isn’t shy about celebrating Northrop’s steady progress on the first airframe. When the plane flies for the first time in late 2021 or soon thereafter, it’s sure to be a banner moment for the flying branch as it works to boost its own support in Congress and among the public.

Sure, something -- probably several somethings -- is flying over Area 51. But it’s almost certainly not a B-21.