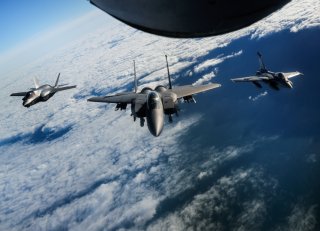 The air forces of Australia, Japan, and the United States are currently taking part in Cope North 2022 (CN22), a humanitarian assistance and disaster relief (HA/DR), large force employment, and aerial combat training exercise. This year's CN22 began on February 2 and will conclude on the 18th. It kicked off with an HA/DR training event to reinforce the three partner nations' interoperability and ability to support the Indo-Pacific region during a natural disaster.

Operations are taking place at Andersen Air Force Base and Northwest Field on Guam; the Commonwealth of the Northern Mariana Islands, including Rota, Saipan, and Tinian; Palau; and the Federated States of Micronesia. Fighter aircraft from the U.S. Air Force, the Japan Air Self-Defense Force (JASDF), and the Royal Australian Air Force (RAAF) have been conducting aerial refueling, close air support, and counter-air missions.

The training sorties will conclude with a large force employment exercise designed to enhance readiness and interoperability among the three countries.

The annual Cope North exercise remains one of the largest multilateral exercises in the region. After first being held at the Misawa Air Base in Japan in 1978, the exercises moved to Andersen Air Force Base in 1999.

More than 2,500 U.S. personnel are currently training alongside about 1,000 Japanese and Australian personnel. Approximately 130 aircraft from more than thirty units will fly in the exercise. This year, participants will also gain experience in the Agile Combat Employment (ACE) concept. ACE is the U.S. Pacific Air Forces' model to project combat power through a network of distributed operating locations in the Indo-Pacific.

More than 2,000 sorties across seven islands and ten airfields are planned for CN22.

"Exercise Cope North is focused on interoperability with our partner nations through combined tactics, techniques and procedures for humanitarian assistance and disaster relief operations and the mass combat and air mobility missions," Australian Task Group Commander Group Captain Andrew McHugh told reporters. “Working alongside the United States Air Force and the Koku-Jieitai in a realistic training scenario across complex island terrain will further enhance our capabilities to ensure we are able to provide timely and effective responses when called upon in real-time situations."

Eight additional countries have sent sixteen officers to participate in the International Observers Program (IOP), which provides international field grade officers the opportunity to observe key parts of the exercise in the hope that they will participate with aircraft in the future. France, South Korea, and India are participating in Cope North this year.

On February 5, U.S. Air Force aircraft were joined by warplanes from the RAAF and JASDF for a close formation taxi, also known as an "elephant walk." Photos showed multiple C-130J Hercules transport planes, at least one C17, and a Sikorsky UH-60 Black Hawk helicopter.

The term elephant walk was first coined when large air fleets were launched together for bombing raids during World War II. The aircraft would prepare for take-off in nose-to-tail formations, similar to a herd of elephants. The U.S. Air Force has conducted several elephant walks in Guam in recent years; one that was carried out in April 2021 included around a dozen B-52s.

These displays of the brute firepower and immense capabilities of the U.S. military and its Pacific allies continue to serve as a deterrent to regional adversaries.