U.S. Air Force F-35s Are Knocking on Russia’s Back Door 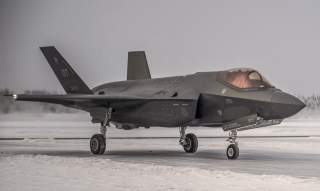 The U.S. Air Force has stood up a fighter squadron to operate F-35A Lightning II stealth fighters in Alaska. The re-establishment of the 356th Fighter Squadron at Eielson Air Force Base in Alaska’s interior puts the radar-evading warplanes within reach of Russian air space.

It might not be long before F-35s join Alaska-based F-22s in intercepting Russian bombers and other warplanes that frequently probe American defenses. The single-engine F-35s also quickly could deploy in the event of a major war in the Asia-Pacific region.

The Air Force decided to reestablishing the 356th and another squadron for F-35 operations as well as to expand the flying branch’s presence in Alaska. Squadrons in the state could be among the first to head west in the event of a major conflict with Russia or China.

“The 356th FS is reactivating to bring F-35As out to the Pacific theater,” Lt. Col. James Christensen, the squadron’s new commander, said at the unit’s reactivation ceremony in October 2019. “Looking back at the squadron history, the 356th Tactical Fighter Squadron was previously stationed in the Pacific for both the Vietnam conflict, and to defend Korea and Japan out of Kunsan air base and Misawa air base, respectively. We are excited to bring the squadron back to the INDOPACOM theater.”

The 356th’s aircraft are on track to arrive in early 2020. The squadron is authorized 24 fighters. The Air Force altogether hopes to acquire around 1,700 F-35s through the 2030s, replacing hundreds of F-16s and A-10s and helping the service to grow its force structure. The Air Force in 2018 announced its goal of adding seven fighter squadrons to the 55 it currently has.

Once both of the new F-35 squadrons stand up by 2022, Eielson and nearby Elmendorf Air Force Base will host four squadrons of stealth fighters. Elmendorf’s 3rd Wing flies two squadrons with around 40 F-22 Raptors and has been on the cutting edge of tactics-development for the twin-engine jet.

The 3rd Wing pioneered the so-called “Rapid Raptor” concept, whereby a small group of F-22s accompanied by a C-17 cargo plane carry ground crews, spares and weapons quickly deploys to a remote air base. The concept allows the Air Force to spread out its forces, potentially surprising the enemy and complicating efforts to destroy American planes at their bases.

A squadron of F-16s at Eielson acts as an “aggressor” force, playing the enemy in war games. The base is lucky to have the F-16s. Twice since 2013 the Air Force has mulled shutting down the squadron. But preparations for high-end warfare have increased demand for aggressor services.

The Air Force expects private companies to meet most of that demand. Alaska will be one of the few states with a military-run aggressor force. Co-locating aggressors with F-35s at Eielson could help the F-35 pilots to prepare for major warfare against a high-tech enemy.

“We are strategically placed here in Alaska to prepare and project fifth-generation stealth fighter capabilities, working with our program partners and allies in the Pacific and to be ready, if called, to deploy around the world,” said Christensen.

Adding two F-35 squadrons requires a major expansion of Eielson’s facilities. Base population could double to around 4,000 personnel.