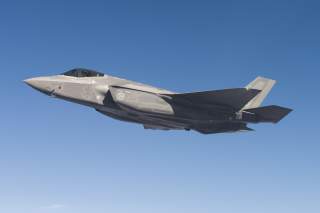 With this kind of synergy in mind, the Air Force is launching a next-generation airborne surveillance and command and control technology intended to successfully synchronize air, ground, drone and satellite assets onto a single seamless network, service officials said.

The emerging system, planned to reach full maturity in the 2040s, is called Advanced Battle Management and Surveillance (ABMS). It was introduced in the recently released Air Force 2019 budget.

It may be that a new JSTARS platform could operate in tandem with other systems, networks and aerial platforms able to assist the mission in higher-risk environments. In fact, this kind of cross-domain connectivity seems to be at the heart of what ABMS seeks to accomplish.

This initiative, carving out a new innovation-based short and long-term plan, articulates a much-deliberated Air Force path forward regarding the future of its platform. The emerging plan represents the manifestation of lengthy Air Force considerations about whether the large and “not-so-stealthy” manned JSTARS platform would remain functionally useful in a high-threat, high-tech modern threat environment.

ABMS seeks to harvest the latest ISR-oriented technologies from current and emerging systems as a way to take a very large step forward – and connect satellites, drones, ground sensors and manned surveillance aircraft seamlessly in real time across a fast-changing, dispersed combat area of operations. ABMS is described by Air Force officials as more of a “system” than platform-specific application. This technical approach is of great significance amid anticipated future threat scenarios wherein electronic attacks, cyber intrusions and GPS "jamming" weapons are both emerging and proliferating.

Over the longer term, the advanced ABMS suite of sensors and ISR technologies could integrate on a number of current and future air platforms - especially drones - Air Force officials told Warrior Maven.

​​Recent thinking from senior Air Force weapons developers had held that US hypersonic weapons might first be deployable by the early 2020s. Hypersonic drones for attack or ISR missions, by extension, were thought to be on track to emerge in the 2030s and 2040s, senior service officials have told Warrior Maven. More recently, Air Force Secretary Heather Wilson, and service Acquisition Executive Dr. William Roper have been pursuing a massive acceleration of hypersonic weapons and drones which is already moving this timetable forward substantially.

A weapon traveling at hypersonic speeds, naturally, would better enable offensive missile strikes to destroy targets such as enemy ships, buildings, air defenses and even drones and fixed-wing or rotary aircraft depending upon the guidance technology available. A drone or unmanned ISR platform traveling at hypersonic speeds would better enable air vehicles to rapidly enter and exit enemy territory and send back relevant imagery without being detected by enemy radar.

Scientists explain that speed of sound can vary, depending upon the altitude; at the ground level it is roughly 1,100 feet per second. Accordingly, if a weapon is engineered with 2,000 seconds worth of fuel – it can travel up to 2,000 miles to a target, a former senior Air Force scientist (Zacharias) told Warrior in a previous interview.

The service recently awarded several developmental deals to Lockheed to expedite prototyping of a hypersonic weapons, one of which is called the “Air Launched Rapid Response Weapon,” Air Force news reported.

These kinds of propulsion and weapons technologies are currently informing the exploration of hypersonic drone platforms able to surveil, strike and defend.

Lockheed’s Skunk Works division is currently working with the Pentagon on the SR-72 hypersonic drone, designed to travel at Mach 6. Visions for this platform, according to reports from Popular Mechanics and Aviation Week, incorporate engineering the drone for strike missions as well. Current plans call for a “Flight Research Vehicle” to be constructed in the early 2020s, with a full-scale version to be in service sometime in the 2030s, the Av week report states.