The U.S. Air Force Is Getting More F-35s (Thanks to Turkey and Russia) 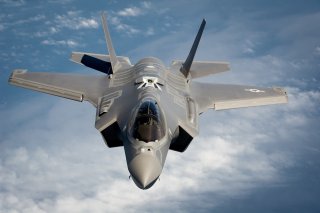 The Pentagon has announced that the United States Air Force will purchase eight additional F-35A conventional takeoff and landing jets that were originally built by Lockheed Martin for Turkey as part of an $861.7 million contract modification.

“This modification exercises options to procure eight Lot 14 F-35A Lightning II repositioned aircraft as a result of the Republic of Turkey’s removal from the F-35 program, and six Lot 14 F-35A aircraft for the Air Force,” according to a Department of Defense contract announcement.

Turkey had originally planned to buy one hundred or more of the F-35 Joint Strike Fighters, and that would have made it among the largest operators of fifth-generation stealth aircraft. However, when Ankara opted to buy the Russian S-400 air-defense system Turkey was ejected from the program. U.S. officials noted at the time that S-400 was “incompatible” with operating the F-35 jets. A concern was that Russian technicians supporting the air defense system would work in close proximity to the F-35 jets and potentially access the secrets of its stealth characteristics.

For its part, Turkey maintained that Russia would have no access to the S-400s after all of the technical procedures were completed. The Turkish military began to receive the first batches of the air defense systems a year ago.

Under the Fiscal Year 2020 version of the National Defense Authorization Act, Congress gave the Pentagon permission to spend up to $30 million to store and preserve the first six Turkish F-35s until the Department of Defense formulated a plan for their uses.

Turkey in the Supply Chain

Despite being ejected from the program last year, as of this spring Turkey was still producing and delivering parts for the Joint Strike Fighter.

The fifth-generation fighter jet is made up of more than three hundred thousand individual parts that are produced by subcontractors throughout the United States, Canada, Australia, Israel as well as multiple European NATO allies including the UK, Italy, Norway and Denmark.

Work on the U.S. Air Force’s aircraft will be performed primarily at Lockheed Martin’s facilities in Fort Worth, Texas with supplies coming from El Segundo and San Diego in California; Baltimore, Maryland; Orlando, Florida; Nashua, New Hampshire; and Warton, Lancaster in the United Kingdom. That work is expected to be completed by May 2026.

Back in the Program

It was also proposed last month that Turkey could get back into the F-35 program by allowing the U.S. military to buy Turkey’s S-400 air defense system.

In an amendment to the 2021 National Defense Authorization Act, which was submitted by Senate Majority Whip John Thune (R-S.D.), the United States would purchase the system and thus Turkey wouldn’t be in violation of 2017’s Countering America's Adversaries Through Sanctions Act (CAATSA). Under that act, any nation procuring a major defense article from Russia would face major sanctions.

While it is unlikely that such a transfer of the S-400s would occur, it would need the approval of the Turkish government, Secretary of Defense Mark Esper and U.S. Secretary of State Mike Pompeo. Moreover, the three authorities would have to certify that the money Turkey receives for its S-400 would not be used to “purchase or otherwise acquire military apparatus deemed by the United States to be incompatible with the North Atlantic Treaty Organization,” a nod to NATO’s foremost concern about the Russian air defense system.

There is little reason to believe that Recep Tayyip Erdoğan is even eager to give up the S-400, but it is also understandable why the U.S. military would very much be interested in acquiring the platform. If the United States were able to acquire the S-400 missile defense system, then its capabilities could be better understood and exploited to protect the F-35 and F-22 stealth fighters from Russian radar.