The U.S. Air Force Has ‘Built’ and ‘Flown’ a Potential 6th-Generation Fighter Jet 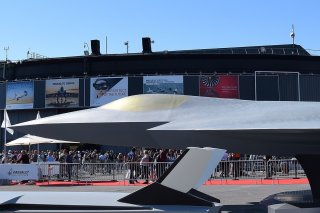 While the U.S. military is still "addressing" a few problems with its Lockheed Martin F-35 Joint Strike Fighter, efforts are apparently well underway to develop the next-generation fighter jet. The U.S. Air Force secretly designed, built and even flew a prototype of the fighter of the future.

"We've already built and flown a full-scale flight demonstrator in the real world, and we broke records in doing it," Dr. Will Roper, assistant secretary of the Air Force for Acquisition, Technology and Logisitics told Defense News in an interview ahead of this week's Air Force Association's Air, Space and Cyber Conference. "We are ready to go and build the next-generation aircraft in a way that has never happened before."

Few details were shared about the jet, which is part of the Next Generation Air Dominance (NGAD) program, the Air Force's effort to develop a family of connected air warfare systems. This group of systems won't be just piloted aircraft, but will include unmanned drones and other platforms that could operate in the air, space and even in cyberspace.

Details of this sixth-generation aircraft were in a word: sparse.

Roper didn't disclose how many prototype aircraft have flown or even which defense contractors were involved in their/its manufacture. Nor did he disclose when or where the mystery flight even occurred. No details on whether it was crewed, optionally crewed or even unmanned, or whether it has stealth capabilities.

What Roper did say was cryptic.

"We're going after the most complicated systems that have ever been built, and checked all the boxes with this digital technology. In fact, [we've] not just checked the boxes, [we've] demonstrated something that's truly magical," he added.

The NGAD program was first initiated in 2017, but it has largely been conceptual. It was only in June that Air Force officials even said they were "prototyping" the technology. Work has included modeling and efforts to explore crucial hardware and software technologies.

The current prototype may thus be a technology demonstration that could be used for risk-reduction efforts or to prove major concepts, The Drive.com suggested.

According to service budget documents, the NGAD's key attributes include enhancements in "survivability, lethality and persistence across a range of military operations." The Air Force's fiscal year 2021 budget request called for about $1 billion in funding, Task and Purpose reported. That was up from $905 million in 2020 and $413 million in 2019. The program is expected to cost an additional $6.5 billion through 2025.

As the Air Force moves forward with the NGAD it could be another challenger to the F-35 and F-15EX programs, especially as this comes after the U.S. Navy has already sought to acquire a sixth-generation warplane to follow the F-35C.

The Navy effort – tentatively called the F/A-XX – has also been largely cloaked in mystery, though it would replace their F/A-18E/F Super Hornets.

Given those ongoing issues with the $1.5 trillion F-35 perhaps the Air Force and Navy are wise to be exploring other options.