The U.S. Air Force Has Revealed a New Program to Build Laser Weapons and Much More 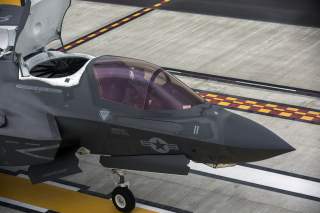 The call for these new Vanguard programs, as articulated in the recently unveiled “Science and Technology Strategy for 2030,” arises from the widely-circulated concern that the US may fall behind major power rivals in crucial areas of warfighting technology. With this in mind, the new effort could be described as somewhat of a hybrid, seeking to leverage the benefits of fast-evolving new technologies with a near-term emphasis on delivering operational weapons.

“Vanguard programs will be limited in time and scope to achieve focus and urgency. While emphasizing advanced technology, they can synergize applied research, selected basic research, and experimentation and prototyping to drive forward innovative capabilities,” as written in “Science and Technology Strategy: Strengthening USAF Science and Technology for 2030 and Beyond.”

The new Air Force S&T strategy entertains an expansive sphere of priorities, including large numbers of distributed sensors, multi-platform information sharing and AI-enabled long-range precision weapons. Building upon this premise, the strategy cites hypersonic flight, laser-directed energy, smart munitions and cyberwar as what might be called “connective tissue” between new technologies created through innovation and weapons immediately “ready” for war. Each of these cited systems balance themselves upon what might initially be thought of as opposite ends of the spectrum -- because they all contain both in-development elements intended for future use, as well as near-term operational weapons.

Laser weapons, for instance, are already deployed on Navy ships, yet also being developed for a range of future applications, such as laser-armed fighter jets or even satellites. This kind of scenario inspires a two-fold trajectory; in one sense, existing weapons systems, such as lasers, can be upgraded as technical improvements arrive while bringing new advantages to existing war challenges in a more immediate sense.

This kind of integrated approach, which at times can use new software to upgrade existing systems, is intended to offset potential concerns that promising technology will be left on the shelf or prematurely thrust into war. A dual-pronged strategy, such as these new Vanguard programs, appears aimed at avoiding either of these scenarios while maximizing fast-tracked technical advantage for war forces.

Hypersonics development represents another example of this hybrid approach because hypersonic flight is a long-term effort, yet, at the same time, initial hypersonic weapons are being fast-tracked to arrive as soon as next year. These examples are encompassed in a recently-emerging Air Force strategic emphasis to pursue rapid prototyping or “bending metal” earlier in the acquisition process to build-in resiliency, identify points of failure and produce war-ready weapons on a much faster timeframe. This concept, recently described by Air Force Acquisition Executive, William Roper, seems aligned with the stated rationale for Vanguard programs introduced in the S&T strategy. **.(To Read Warrior Maven's Story About Air Force Hypersonic Weapons*** Click Here)

In yet another instance, advanced “fusing” and precision-guidance technology for air-dropped bombs is another emphasis in the S&T strategy because, along with the others cited, this area brings an immediate promise of improved attack along with related technical improvements expected to surface in coming years. While GPS-guided air-dropped bombs are now decades old, newer kinds of fusing, explosive yields or “variable effects” are rapidly widening the envelope with which air assets can attack. The force, blast or energetics of an air-dropped bomb can now be adjusted more quickly and efficiently through an Air Force Research Lab program called Dialable Effects Munitions.

The largest area of focus in the S&T strategy, not surprisingly, centers on AI, cyberwar and the need for “networked” warfare and information sharing in real time, across multiple nodes. Progress in this area is fast-becoming indispensable to the aforementioned weapons systems, such as hypersonics, lasers and smart bombs. An ability to “update-as-you-go” through software innovation is central to this strategy. The idea, as Roper explains it, is to avoid having to integrate software upgrades in blocks over set time-increments and rather quickly adapt software as new technology arrives. In fact, Roper has gone so far as to say software may very well decide “who wins the next war.”

It could be said that the thrust of this technical focus seeks to quicken the kill-chain, shorten sensor-to-shooter time and give human decision-makers faster and more accurate data with which to make decisions. This phenomenon, described in the S&T strategy as “resilient” information sharing, cites a need for “mesh networking.” As part of this, the strategy calls for dispersed or distributed systems able to share information across longer distances, build-in redundancy with large numbers of sensors and ensure continued functionality in the event of catastrophic attack.

Much of the language in the strategy refers to the technical agility needed to outpace fast-improving major rivals. While Russia or China are not specifically cited, they are, of course, known to be areas of focus in this regard. Ultimately, the strategy attempts to shine new light upon the path needed to stay in front of enemies for decades to come.

“Looking at where potential adversaries are heading, the Air Force scientific and technical enterprise will predict where adversaries cannot easily go and then ensure the Air Force gets there first,” the strategy states.