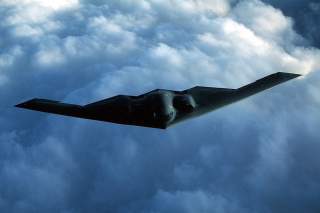 Cutting 18 B-1s and B-2s would shrink the bomber fleet to 140 airframes at precisely the time the Air Force also says it wants to grow the bomber force to more than 225 planes.

But the cuts the Air Force is proposing are consistent with reductions the U.S. Navy plans to make its own forces.

The Navy long has insisted it wants to grow its front-line fleet to 355 major vessels. But Navy leaders have forwarded a budget proposal for 2021 that actually shrinks the fleet from today’s 294 ships to around 287 by 2025.

The gap between what the Air Force and Navy say their goals are, and what they’re actually doing, is growing wider by the budget cycle.

The B-21, the first copy of which is under construction at Northrop Grumman’s facility in Palmdale, California, could fly for the first time as early as 2021.

“Currently a portion of the B-1Bs are in a state that will require tens of millions of dollars per aircraft to get back to a status quo fleet in the short term until the B-21 Raider comes online,” stated Air Force Global Strike Command, the organization that oversees the bomber fleet.

“As such, Air Force officials proposed the retirement of 17 structurally deficient B-1Bs in 2021 so that maintenance dollars and manpower can be focused on the healthiest aircraft in the fleet,” the command added.

The command explained that it would maintain all four combat-coded B-1 squadrons in South Dakota and Texas, and simply reduce the number of planes in each unit. The B-2 force likewise probably would keep its two front-line squadrons, although they would share one fewer plane.

A reduction in bombers today is likely to undermine the longer-term goal of expanding the bomber force, the Air Force Association’s Mitchell Institute warned in a December 2019 study entitled “Moving Toward the Air Force We Need? Assessing Air Force Budget Trends.”

Dave Deptula, dean of the Mitchell Institute for Aerospace Studies in Virginia, anticipated the current bomber dilemma in November 2019 article in Forbes.

“The B-21 promises to be a very advanced and capable aircraft and the Air Force should procure them in ample numbers as rapidly as possible,” Deptula warned. “However, until the day comes that the B-21 is fully mission-capable in sufficient numbers to meet the needs of the national defense strategy, the legacy bomber force will have to answer the call to fly and fight.”

Congress approves federal spending and could reject the Air Force’s request to retire bombers. But it’s worth noting that Pres. Donald Trump repeatedly has circumvented lawmakers to divert military spending from aircraft programs to his effort to build a wall on the U.S. southern border.