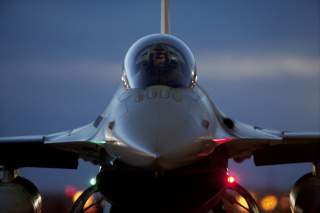 The U.S. Air Force still is short thousands of pilots. All the effort the flying branch has made in recent years to fill the gap so far have failed.

Air Force officials on March 3, 2020 told a House Armed Services subcommittee that the service is short 2,100 pilots. That’s 10 percent of the 21,000 pilots the flying branch says it needs to fly its roughly 5,500 aircraft.

The pilot shortfall limits how effectively the Air Force can train for war and how many sorties it could launch during a crisis.

And it’s not clear that anything but a major economic downturn can solve the problem.

The pilot shortage opened up as the U.S. economy began recovering from the 2008 financial crisis. By 2017 the shortfall had grown to 10 percent of pilot billets. It’s stayed there for three years.

The service also expanded its training infrastructure in order to produce as many as 1,400 new pilots annually, up from 1,200 before.

It didn’t work. And there’s one good reason for that. Flying for airlines almost always pays better and affords a more rewarding lifestyle for pilots than does flying for the Air Force. As long as airlines are hiring, the Air Force struggles. It’s been like that since the Air Force’s founding in 1947.

The first pilot shortage struck at the outbreak of the Korean War in 1950. Tens of thousands of pilots had voluntarily left service as the United States demobilized at the end of World War II. Not coincidentally, airlines were enjoying a huge post-war boom.

To fill the gap, the Air Force brought back some retired World War II combat pilots who weren’t already flying airliners and grew the training infrastructure for new crews. By 1966, the Air Force actually had a pilot surplus.

The active-duty force that year needed 38,000 pilots and had 40,000, according to official statistics Lt. Col. John Rhodes explained in a 1985 study of pilot shortages for the Air Force’s Air University in Alabama.

The 2020 shortage is around half as bad, adjusting for today’s smaller Air Force.

In 1967, the Air Force solved its manpower problem in part by increasing new pilot production from 2,000 annually in 1966 to 3,500 in 1970. The service also reduced the pace of overseas deployments, easing the stress on individual pilots.

A slowdown in airline hiring helped. In 1970 airlines lost money for the first time since 1962, according to statistics Paul Stephen Dempsey, then the director of the Institute of Air & Space Law at McGill University in Montreal, compiled in 2013.

In 1971 the pilot gap shrank to just 300. As the United States withdrew from Vietnam in the mid-1970s, demand for aircrew abated and the pilot deficit became a 2,800-pilot surplus.

The U.S. military buildup in the 1980s added thousands of warplanes to the Air Force’s inventory. Demand for pilots swelled by 2,000 to 25,000 between 1980 and 1988. But by mid-decade the economy was strong and airlines were hiring. The service on average was 800 pilots short for most of the decade.

Then the Cold War ended. The Air Force retired thousands of aircraft and shuttered hundreds of bases. The service in 1994 had 750 more pilots than it needed. Airlines were hiring, so pilots left the Air Force in droves.

Too many, in fact. By 1998 the flying branch once again was short aircrew.

The current shortage first appeared a few years later. And the military knows it has little choice but to wait out the current, healthy economy.

California think-tank RAND predicted that the Air Force would suffer high levels of pilot attrition through 2020. A 2017 study by the U.S. Government Accountability Office anticipated a shortfall through 2023.

The most pessimistic projection came from Air Force Lt. Gen. Gina Grosso, who in March 2017 told the House Armed Services Committee that strong airline hiring could continue “for the next 10 to 15 years.”