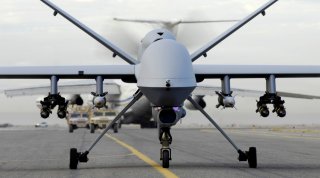 The Air Force is revving up plans to acquire more Reaper surveillance and attack drones faster with a decided effort to expedite the development and delivery process of up to as many as thirty-six new drones per year.

The refined acquisition plan, led by the Air Force Life Cycle Management Center’s MQ-9 Program office, is expected to reduce the time it takes to deliver the aircraft to operational units by as much as 35-percent. The program is called Agile Enterprise Reaper Solution (ARES).

“Prior to ARES, the standard contract award timeline was roughly 380 days. Now we can award in just a couple of days and field the aircraft in 26 months” Alicia Morales, aircraft production manager with the Medium Altitude Unmanned Aerial Systems, said in an Air Force report.

Reapers are in such high demand due to what Air Force leaders describe as an “insatiable appetite for ISR,” yet in recent years the mission scope of the drone has been expanding substantially. The service has been incrementally adding more weapons to the platform, including more air-to-ground air-dropped bombs.

The Reaper now fires the AGM-114 Hellfire missile, a 500-pound laser-guided weapon called the GBU-12 Paveway II, and GBU-38 Joint Direct Attack Munitions or JDAMs—free-fall bombs engineered with a GPS and Inertial Navigation Systems guidance kit. JDAM technology allows the weapons to drop in adverse weather conditions and pinpoint targets with “smart” accuracy. Once released from the aircraft, the JDAM autonomously navigates to the designated target coordinates. Air Force data on JDAMs says target coordinates can be loaded into the aircraft before takeoff, manually altered by the aircrew before weapon release, or automatically entered through target designation with onboard aircraft sensors.

In its most accurate mode, the JDAM system will provide a weapon circular error probable of 5 meters or less during free flight when GPS data is available. Circular Error Probable, or CEP, is a measurement indicating the area in which more than half of the precision-guided munitions are expected to hit.

If GPS data is denied, the JDAM will achieve a 30-meter CEP or less for free flight times up to 100 seconds with a GPS quality handoff from the aircraft, Air Force data explains. JDAMs can be launched from very low to very high altitudes in a dive, toss or loft and in straight and level flight with an on-axis or off-axis delivery, service information adds.

Furthermore, additional air-to-surface guided weapons could add mission possibilities to the current Hellfire and laser-guided bombs able to hit smaller and mobile targets, enabling the Reaper drone to have success with attacks against groups of enemy fighters, moving combat vehicles or other high-value targets.

Senior Air Force officials have told The National Interest that the Reaper may even drop the Small Diameter Bomb, a smart weapon with a range of 40-miles. The bomb’s small size reduces collateral damage and would allow the Reaper to achieve more kills or attack strikes per mission, The Small Diameter Bomb, which can strike single or multiple targets, uses GPS precision. It is currently fired from the F-15E, F-16, F-117, B-1, B-2, F-22, and F-35.

The Air Force currently operates more than a hundred Reaper drones and has, in recent years, been configuring the platform with additional fuel tanks to increase range. The Reaper Extended Range, or ER as it’s called, substantially increases and builds upon the current 4,000-pound fuel capacity of the drone with a range of 1,150 miles. The upgrades to Reaper add two 1,350-pound fuel tanks engineered to increase the drones endurance from sixteen hours to more than twenty-two hours, service developers have said.